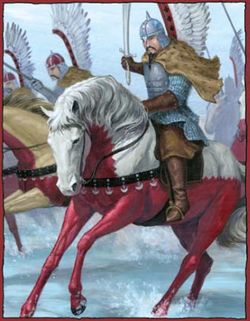 The Gryphon Legion are the most elite and famous regiment of the Winged Lancers cavalry and form part of the army of Kislev.

They are made up of the highest ranking nobles of Kislev and are comparable to the knights of the rest of the Old World. In practical terms, they are a semi-independent military order, which travels the world and operates as mercenaries, but are obliged to return to Kislev if called by the Tzar.[1a]

Northern familes sometimes send daughters as well as or instead of sons to serve in the Legion. [3a]

The Gryphon Legion came into being in 286 GC (1810 IC) as the elite bodyguard to Tzar Gospodar IV. In 1817 IC they were made into a semi-independent order after an expedition into the Worlds Edge Mountains, seeing them defeating many great beasts of Chaos. Their commander was Vladic Dostov who slew a Griffon single-handedly. From then on, they took the prize of the wings of the Griffon, made from real Griffon feathers and placed them on their backs. [1a][1b]

They spend most of their time fighting for wealthy nobles in the Empire, where they have won most of their battle honours, but are sworn to return at the call of the Tzar. This is unusual as most threats can be dealt with by the Winged Lancers and Ungol Horse Archers. They are a sight to behold and many enemies have panicked in the face of these adversaries.[2a]

A company of the Legion helped defend Praag during the siege by Arek Daemonclaw and carried out sweeps of the surrounding countryside following his defeat, killing those Chaos Marauders that still remained. [3a]

They have a fortified barracks in the city of Kislev (city) Kislev which is home to almost a hundred warriors and has space for a further fifty. it is are equipped with stables for horses, a mess hall, and training facilities. [1b]