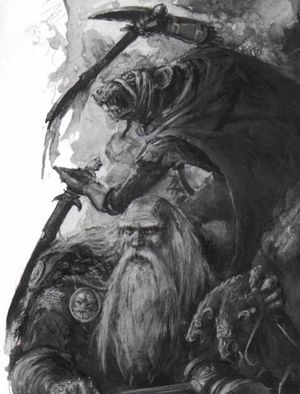 This article is about the Skaven members of Clan Eshin; for the short story by William King, see Gutter Runners (Short Story).

Gutter Runners are experienced members of Clan Eshin. Although already trained in the deadly skills of Clan Eshin they must master them whilst working in their small packs to become full Skaven Assassins.[1b]

They are skilled at infiltrating and scouting ahead of the main Skaven lines as well as ambushing and destroying enemy machinery or small groups of fleeing soldiers. They are also useful for cutting down enemy wizards and leaders. They have been known to use the Skaven Under-Empire to make surprise attacks on forward enemy positions or the rear of an advancing enemy force.[2]

In 2320 (Imperial Calendar), Gutter Runners used naphtha and firepots in raids on ports throughout the Empire, Bretonnia, Estalia and Tilea, burning many ships. [1a]

Gutter Runners are armed with one or more Swords or similar Hand Weapons and depending on their mission may be equipped with Throwing Stars, Nets, Slings and may wear Light Armour.[1b]