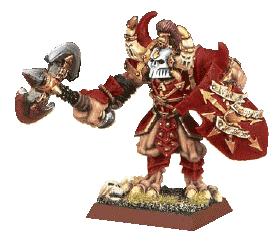 Haargroth the Blooded One was a mighty and infamous Champion of Khorne [2a] and the the Jarl of the Graeling tribe of northern Norsca.

Though formerly a goatherd, he proved his mettle in combat when he butchered a Beastkin warlord with his own axe. By chance, the weapon was blessed by Khorne, and set Haargroth on the path to glory. Soon enough, his frame began to swell with muscle and he towered over his fellow Norsemen, thus establishing his power over the tribe. When the chieftain, himself a powerful champion of Chaos, returned to his hall and found Haargroth seated on his throne, the incensed warlord challenged the warrior to battle. That night, the Graelings had a new leader.

Haargroth led his people on many great raids and invasions against their enemies. His longships had even ranged as far south as the mangrove-lined shores of Lustria. His savagery and bloodthirst were such that even the other tribes of Norsca dreaded the coming of his warriors, who were soon known informally as the 'Slaughterers of Haargroth'. Soon, his victories were beyond counting, and the plunder he had reaped from his raids had made the Graelings wealthy.

But Haargroth sought only the thrill of battle and the exultation that could be garnered only from the clash of arms with a powerful opponent. To that end, he led his clan to the Chaos Wastes, decimating the many horrible creatures of that place in search of a foe whose blood would honour Khorne. Eventually, Haargroth came into battle with Archaon the Everchosen. Though Haargroth was mighty beyond all mortal perception, not even he could stand long against a man bestowed with the ultimate blessings of all Four of the Chaos Gods. But rather than slaying Haargroth, Archaon recognized his strength and worth and offered him generalship of one of his armies. Thus, Haargroth became one of Archaon's Lieutenants, as was prophesied centuries before his birth by the mystic, Necrodomo the Insane.

The Saga of the Blooded

The warrior who would one day rise to occupy the highest echelons of the Blood God's favour was once no more than a lowly orphan goatherd. A child without a father is at great risk in Norsca, for without anyone to teach him the ways of axe and sword, Haargroth was deemed unfit to join the men on the summer raids, doomed to a life of ridicule, without favour in the eyes of the dread deities of Norsca. However, this changed one fateful day.

While the chieftain was off raiding with his bondsmen, Haargroth tended to the goats as was his charge. One of the animals was found missing, however, having wandered off into the woods. Within the forest, he came across the bloody remains of the animal, having been feasted upon by a Beastman warlord, his snout still dripping with the creature's blood. He saw the beast's axe resting at one side away from his grasp, and he felt a voice urge him to take revenge.

Rage smoldering in his heart, the young Norsemen took up the battleaxe and struck the Beastlord with such fury that he had almost hacked him in two from shoulder to belly. Again did Haargroth strike the monster, and again and again until he had reduced the mighty beast into a bloody stain on the ground. With this single act of anger, Haargroth took the first steps towards glory and power.

The axe, as it transpired, was a Daemon Weapon of Khorne, bound with the essence of one of his foul Bloodthirsters. As Haargroth rose up from the carnage he had wrought, he was astonished to see the blood upon the axe-blades vanish, as if absorbed by the weapon itself. He saw the axe's rough, wooden handle morph into flawless, shining stone and the weapon become encrusted with harsh runes. At once, Haargroth realized which amongst the Gods of Norsca had picked him out for greatness. Skinning the corpse of the Beastman and wearing its bloody fur about him as a cloak, Haargroth emerged from the woods a changed man.

Haargroth, his manner changed beyond all recognition and strengthened by the favour of Khorne, strode boldly into the Hall of the Graeling tribes. Seeing as how he was drenched from head to toe in blood and was swathed in the skin of a beastman, few men dared to challenge the goatherd turned warrior. Taking the chieftain's seat in the meadhall, Haargroth established his dominance over the hunters, elders and other non-warriors left in the tribe.

As the summer ended, the chieftain returned from the raids, his longships rich with plunder. His warriors bellowed the songs of their valour as they entered the hall. As was tradition, the chieftain was to enter last. When he crossed the threshold, he was not met by Marauders roaring his name, but only stunned silence and a hulking warrior in red-plate seated upon his throne. The chieftain, a champion of Chaos in his own right, roared and charged Haargroth, his own axe readied for a murderous strike. All assembled in the meadhall watched in astonishment as Haargroth caught the chieftain's axe and deflected it, lodging it in the wood of the hall. Before he could wrench it out, the chieftain was struck down by Haargroth's daemon-axe. With that, the Graelings bellowed Haargroth's name and accepted him as their new leader.

The raiding season had been lean for some tribes, and now in order to survive, they had to go to war with neighbouring tribes in order seize resources. With the first snowfalls of winter, the restful silence of the village was broken by the warhorns and battle-cries of a rival Norse clan, the Graeling warriors took up their axes and marched out to defend themselves, with Haargroth at their head.

When the enemy tribe charged the Graelings, it was Haargroth who stood unmoving at the helm, his battle-axe at the ready. In the fighting that transpired, Haargroth's axe rose and fell with such blinding speed and crushing power that soon mounds of decapitated heads and hacked-off limbs accumulated around him. Inspired by his bravery, Haargroth's fellow Graelings willed themselves into a battle-frenzy and roared out the name of Khorne as they slaughtered the warriors of the other tribe. Soon, the raiders were butchered to a man, with none of the Graelings having fallen. The victorious Graelings then carried Haargroth the Blooded, as he was now known, back to the hall of their tribe in triumph.

Strengthened by the bloodshed Haargroth had wrought, his axe had twisted into a weapon of terrifying ornamentation - its full power now fully realized. This was not the only change, for the many victories he had gained in battle had earned Haargroth the favour of Khorne, who bestowed upon the warrior such strength and power that he resembled more a beast than a man. Throughout the winter, he led his warriors to victory in many bloody battles against the neighboring tribes of Norsca, filling the cold valleys with blood. Soon, Haargroth's savagery was infamous even amongst barbarians, the brutality of his warriors such that the other tribes named them the Slaughterers of Haargroth. The name soon stuck.

Over the course of the next years, Haargroth led the Graelings on daring longship raids. Pillaging the lands of Naggaroth to the west, as well as the soft lands of the Empire and Bretonnia, and even as far south as the shores of Lustria. With each victory, he made certain to solidify the loyalty of his warriors, offering the best among them their pick of the plunder and gifting them with magnificent armour and weapons blessed by the Dark Gods. And to remind them of his prowess, he stood first in the battle-line, facing the lion's share of the peril of combat and tearing bloody swathes through the enemy lines.

In time, the Norsemen returned to their unholy homeland and restarted raids against their neighbours. Constantly looking for fresh foes to feed his blade, Haargroth came to realize that the strength of his warband was such that there were none amongst the tribes of Norsca and Kurgan that could offer him a challenge. Thus, he resolved to lead his tribesmen to the depths of the Chaos Wastes itself in search of a worthy adversary.

In the Service of Archaon

North did Haargroth and his men travel, and faced off against the monstrous abominations that dwelt near the great rift. Though his enemies still fell against his bloodlusting fury, Haargroth was pleased to test himself against the beasts of the True North. Though foulness of the Chaos Wastes strengthened the euphoria of his savagery, it soon became clear to Haargroth that no foe could stand long against him, and that he would not soon again know the true joy of battle. Raging, the Norseman howled out a barbarous prayer to his god, and asked of Khorne to send him a worthy foe to kill.

Suddenly, a storm broke the bleeding skies of the Wastes. Hulking daemons wielding brutal axes fell upon the Norsemen as the many-coloured mist of the Wastes enveloped them. In the confusion, Haargroth was separated from his horde. Lost in the fog, the Norscan heard the thunder of iron-shod hooves and the heavy breathing of a beast. Before him stood a mighty daemonsteed, and atop it was a towering knight in black plate wielding a flaming sword. Upon the blackened steel of the breastplate, Haargroth saw the sacred runes of the gods emblazoned upon the black knight, including that of Khorne.

Realizing the gods had answered his call, Haargroth let out a bloodcurdling roar as he charged the unknown warrior, his axe raised above his head for a devastating strike. He brought down his axe in mighty blow that would have destroyed any lesser foe many times over, but to his shock, he found his attack easily blocked by the knight's massive kite shield. Having weathered the berserker's assault, the Lord of the End Times readied his own offensive. His blade came alive with blackened flames and arced down upon Haargroth, tearing through his armour and setting his wound alight with daemonic fire. Struck down to the ground, Haargroth awaited the killer blow and the chance to drink at the Blood God's right hand. Yet, to his surprise, the warrior did not slay him. He declared his name; Archaon Everchosen, Anointed of Chaos, and presented Haargroth and his Northmen with a choice; either continue resisting him and die, or swear eternal fealty to him and be given command of one of his armies. Having finally crossed paths with a warrior even stronger than himself, Haargroth accepted the offer, and joined his horde of berserking Norsemen and slavering Bloodbeasts to the apocalyptic armies of the Dark Redeemer.

Following his defeat at Middenheim, Archaon fell back to Sokh and it was here that Haargroth fought his last battle. As Ar Ulric led the Teutogen Guard into Sokh cutting down the followers of Haargroth, the Chaos Champion charged into their flank and cut down three dozen before he was confronted by Ar Ulric who killed him with a single blow of his hammer, driving his head down into his chest. [1a]