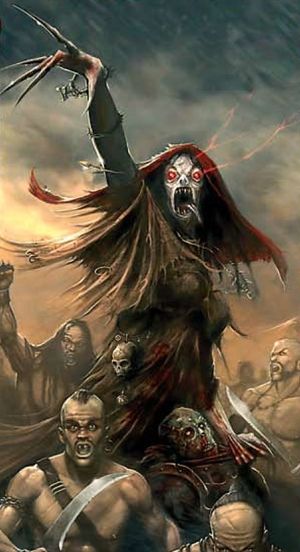 A Hag Witch in the form of the Ancient Widow

The Hag Witches are Ungol women of great magical power in Kislev. [1a]

Ungol women learned to cast magic without using the mutating Chaos Winds thousands of years ago and are able to manipulate, cajole, bully, and bribe the many spirits of the land to do magic for them. However, these spirits are capricious and demand a terrible price in return: a witch’s youth. Hag witches (and Wise Women) are well versed in the use of the sight from centuries of travelling the Troll Country, guarding their people from its taint have refined this skill, which allows them to detect the influence of the Dark Gods. [1a]

Hags can create and bind familiars and often create potions, they may not always be able to read or write but recipes have been passed orally between the hags for hundreds, if not thousands, of years. [1b]

Form of the Ancient Widow

Some witches can allow the Ancient Widow’s most powerful spirits to gather within her, transforming into a grey-haired monstrosity over eight feet in height, with glowing eyes, rusted metal teeth, and long, iron talons. [1c]

The spirits can change, drain and twist a witches body, but they can also grant her a form of immortality and become a constant companion. Some witches suffer from palsy, a club foot or are emaciated, but also may marked with strange tattoos, will never die of old age or are accompanied, served and guarded by such spirits as a Dryad or Spites. The older the witch appears, the more respect the spirits have. [1b]