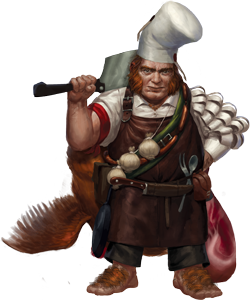 Halflings are a race of small humanoids that live in The Moot, a region of The Empire.

Halflings are roughly half the height of a fully grown man, and are a peaceful and rustic folk, not naturally inclined to adventure or the ways of war. They have great fondness for the simple comforts of good food and drink, a taste which lends them a rather wide frame (though they are still delicate by comparison to Dwarfs).

Halflings were one of the last races to be created by the Old Ones before their fall, and represented a desperate attempt to create a magically resistance race. As it turned out, Halflings are resistant to magic but at the cost of being inbred, stunted, and rather vulgar.[1]

Halflings have lived in the Empire longer than anyone can remember, and in the year 1010 IC, the Emperor Ludwig the Fat issued a charter granting them their own autonomous province. The Halflings have their own Elector in the governing of The Empire, the Chief Elder, a position currently occupied by Hisme Stoutheart.

Halfling state troops are no more than a collection of country watchmen and game wardens. Halflings accompany imperial armies where they carry out the important role of foraging and provisioning.[2]. When they do fight they make able archers, and their ability to move quickly and undetected through thick undergrowth makes them effective scouts.

The most popular deity of the Halflings is Esmeralda, the patron of hearth and home, who in Halfling religion is said to have given them the gift of cookery.