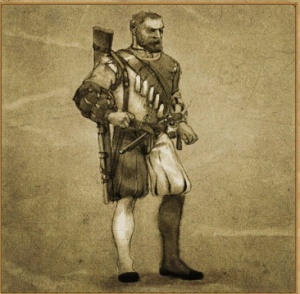 Handgunners are Imperial State Troops armed with handguns - black powder firearms which are often manufactured in Nuln. Technologically, these weapons are quite sophisticated; perhaps as a result, they are less common in the poorer provinces of The Empire, where the difficulty of their manufacture limits the numbers in use. In such provinces, such as Stirland, the crossbow and the bow are more prevalent.

Handgunner sergeants often use an experimental weapon, such as the Hochland long rifle.