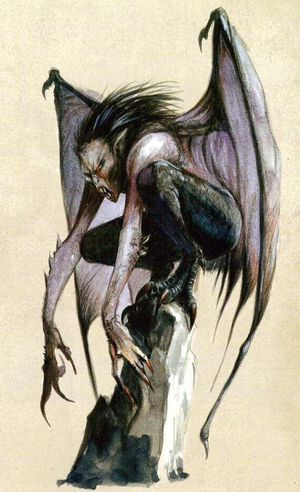 It is their torsos that likely cause such speculation about Harpies, for they have the upper body of a voluptuous female, though with a savage and feral beauty. Their appearance has lead to many arguments among scholars; some concluding that they are little more than mere beasts, others that they are touched by Chaos. Harpies will frequently try to attack from surprise and in large numbers. Their wings are leathery, resembling those of a bat, though their forms often sprout black feathers. Their lower bodies end in scale-covered bird’s legs and jagged talons. They put their wings to good advantage, using hit and run tactics on land bound foes. They will swiftly retreat to a high location where they cannot be readily followed if injured.

They make their lairs in the mountains and cliffs of Naggaroth, the Land of Chill, the Northern Chaos Wastes and the lands of Troll Country but always near the sea, where prey is more readily available. Most commonly, Harpies live in the caves of the Northern Wastes and the Troll Country, but often the woods around Beastman encampments are infested with nests of Harpies. It is as if the creatures are drawn by the same forces that compel the Beastmen to congregate and slaughter captives before the sacred places of the Dark Gods. As the Beastmen enact their hidden rituals, the Harpies glare jealous and restless from the branches above, awaiting the hours when the Beastmen will slumber having spent themselves in their excesses. The Harpies then descend to pick over the bones of the Bray-Shamans' sacrificial victims, squabbling with one another over whatever morsels they can steal.

Many dwell in the Dark Elf city of Karond Kar where they are a sign of good fortune - it is said if they ever left the city, it would fall to enemies within ninety days. [2a]

Harpies are vicious and spiteful, displaying only the meaning glimmerings of intelligence and, even then, only malicious, purpose. Innately cowardly creatures, Harpies band together in great sky-borne flocks, which roam high above the mountainsides and valleys in search of prey defenceless enough to risk attacking. Harpies care little where their next meal comes from and will as happily steal eggs from a Great Eagle's nest as raid farmstead for cattle, isolated villages for the old and infirm or battlefields for meagre scraps of flesh from spent corpses.[3a]

This is not to say that harpies will not attack larger or better-armed creatures than themselves, but it can take many hours for the flock to work up sufficient courage to put themselves at risk. If the flock considers the advantage of numbers to be on their side, they will descend to the fray, screeching and howling as their claws tear at the beleaguered foe. Yet there is no loyalty in such a fight – should a Harpy be slain in the battle, its fellow will devour it as surely as they will the enemy.[3a]

Harpies are scavengers and opportunists who prey upon the sick, weary, battle-worn and dying. Bestial and savage creatures, they perch impatiently amongst the trees as the Beastman horde musters, descending from the gnarled branches as the enemy approaches. As battle is joined, they flock in large, ragged groups over the battlefield, waiting for the chance to dive down upon those too weak or wounded to defend themselves. There is no order or leader amongst Harpies, no more than amongst the most savage of beasts. Their screeching cries cleave the air and cast a shadow of dread on those below. Old Worlders consider a flight of Harpies a terrible ill omen, especially if it is in sight of a town, village or farmstead. And with good reason — for the warherds are never far behind.[3a]

At no time are Harpies more dangerous than when Morrslieb burns fully in the sky. Under the tainted moon's eldritch, Harpies are wilder and more vicious than at any other time of the year, and far more likely to brave dangers in their perpetual search for food. Mountain villages and trade caravans double their watches when Morrslieb is full, lest their loved ones and chattel are spirited away on a cackling wind. Filth and well-picked bones are piled beneath a Harpy's foul roost, yet those brave enough to scavenge can sometimes find cast-off treasures – for Harpies value only meat and leave the rest to fall where it may.[3a]

The elves also sing the Lay of Nashara which tells the story of the Mistress of Wings, a priestess named Nashara who went mad with vengeance and grief and whose descendants are the Harpies. [3a]