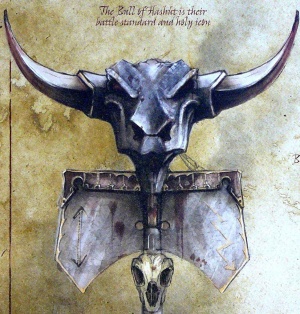 Hashut, the Father of Darkness, is the god of the Chaos Dwarfs. The brazen idols of the god depict him as bull-like or bull-headed. The Chaos Dwarfs abandoned the traditional Dwarfen Ancestor Gods for the worship of Hashut.

Hashut is an evil god, a Chaos god, uniquely associated with the Chaos Dwarfs, who call him the Father of Darkness and themselves the Sons of the Father of Darkness. Hashut is the god of Zharr-Naggrund, the City of Fire and Desolation, and the pinnacle of the ziggurat-city is the Temple of Hashut, and at the top of the temple is an iron statue of Hashut, its hollow belly a furnace fed by coals until the entire statue is red-hot.

The creatures of the Chaos Dwarfs reflect the bull-like appearance of Hashut. Chaos Dwarfs occasionally develop bull-like mutations, including horns, tails and cloven hoofs. During the Time of Chaos when the Chaos Dwarfs were first mutated, some gained the lower torsos of bulls, becoming the Bull Centaurs. These rare creatures are unable to wield magic, but are devoted worshipers of the Father of Darkness and serve as the elite guard of the Temple of Hashut. Other Chaos Dwarfs mutated into the Great Taurus and Lammasu.

The first mention of Hashut appears in the seminal article Chaos Dwarfs by Rick Priestley, in White Dwarf #161. Previous to this, the Chaos Dwarfs were mutants, renegades, and champions of the Ruinous Powers, particularly Khorne, as presented in the supplements Slaves to Darkness. Hashut, as imagined and presented by Priestley, proved to be a critical aspect of the re-imagining of the Chaos Dwarfs as their own unique race, army, and model range.

Other than Chaos Dwarfs and the articles that followed it, which were later collected as the army book White Dwarf Presents: Chaos Dwarfs, mentions of Hashut are scarce. The seventh edition of the Warhammer rulebook describes Hashut as “bull-headed”. The Black Library published the first book of the Liber Chaotica, the Liber Khorne by Richard Williams, which raises questions about Hashut's resemblance to the Juggernauts of Khorne. Most recently, Hashut is mentioned twice in passing in Warriors of Chaos, once as the god of the Chaos Dwarfs and once in a battle site on a map called “The Trails of Hashut.”