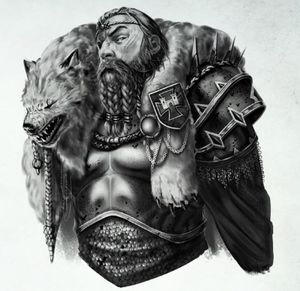 Baron Heinrich Todbringer is the illegitimate but acknowledged son of Boris Todbringer. [1a]

Heinrich is a confident, self-assured man who can be as intimidating intellectually as he is physically and although his illegitimate birth limits him somemwhat, he serves the city and his father by engaging in diplomatic missions. [1a]

He acquired the magical two-handed blade Rathewer on a diplomatic mission to Miragliano and also heard of the healing abilites of Luigi Pavarotti who he brought back to tend to his half brother Stefen. [1a]

the Dwarfs of Middenheim gifted the city with a airship which Heinrich used to travel to Ostland on a diplomatic mission, in the company of Vieiran Thugenheim. [1a]