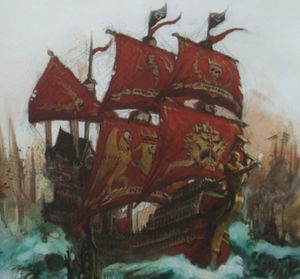 The Heldenhammer is a vast 180-gun warship created to be the flagship of the Grand Theogonist of the Cult of Sigmar. [1b]

The ship has a crew of nearly two thousand and boasts a titanic figurehead - Sigmar's Wrath cast in blessed metal which can crash down on enemy vessels before being winched back into place. With the aftcastle hosting a Grand Temple to Sigmar, the ship is redolant with faith and protected against evil magic. [1b]

Enraged that the Grand Theogonist would not aid him against the vampire Count Noctilus, the pirate captain stole the Heldenhammer from Altdorf harbour, destroying several pursuing ships but also loosing his own ship the Nightwatch. Requiring gold to hire more mighty vessels, he sailed the Heldenhammer to Zandri to plunder the ruins there, making an enemy of the Tomb King Amanhotep but gaining enough treasure to tempt other pirate lords to join him. [1a]