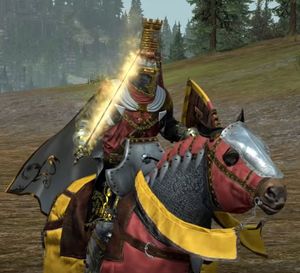 Henri le Massif was a Grail Knight hero who followed Repanse de Lyonesse, fighting as the greatest warrior within the Chevaliers de Lyonesse.

Henri le Massif was mighty a Grail Knight and Paladin who was an expert on the ways of killing monsters. Having supped from The Grail, it made him indomitable in the face of the most fearsome abomination, which combined with his natural valour, lead to him developing particular skill in defeating the biggest and strongest of foes. Henri proved to be a formidable challenge to the most dangerous creatures to prowl the world, such as Dragons and even Greater Daemons. Thus in battle Henri would slay the most horrific of beasts the Chevaliers would face, strong in the knowledge that the Lady was with him. Like the other Knights of Repanse's army, Henri placed himself in her service in recognition of her strong association with the Lady of the Lake.

Henri was a Grail Knight and thus far greater than any mortal warrior. He was capable of slaying many great monsters and fought as Repanse's personal Champion within an already elite army.