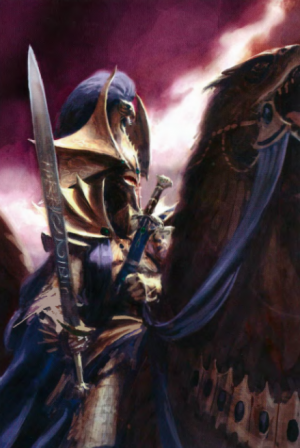 A leader of the Elven race.

The High Elf Princes of Ulthuan are among the great and skillful generals, strategist and warriors this world will ever see. Depending on their wealth and the kingdom of their birth, the princes of Ulthuan fight in many different ways. Those of Tiranoc typically do battle from the back of swift-wheeled chariots, while the lords of Lothern often stand, spear and bow in hand, amidst the ranks of the Sea Guard. Those with the greatest wealth might ride upon a Great Eagle or Griffon or, in the case of the mightiest princes of Caledor, upon a Dragon. Such steeds are invariably a symbol of status, as well as lending a brutal advantage in the midst of battle.[1]

Wherever they hail from, these Princes are incredibly dangerous, able to strike down their foes with unmatched swiftness. They are equally deadly with a lance, spear, halberd, or longbow, able to penetrate even the most resolute defense with a spear thrust or shoot a foe through the eye while riding at full gallop. Princes of the highest rank even wield weapons of legend, magical heirlooms fashioned upon Vaul's forge and held by their families for hundreds, if not thousands, or years. For many families, ownership of such an artefact constitutes their line's right to regal status.[1]

Any prince who bears one to battle will therefore fight all the harder, for he and his family can ill-afford for the blade to be lost to the foe, or be dishonored by defeat or cowardice. Yet whilst a magical weapon might make a noble a prince, it does not make him a general. This comes from his keen mind, his courage and his sense of duty. Thus does Ulthuan forge the finest commanders in the world, leaders able to read the ebb and flow of unfolding battle, knowing when to commit forces, when to retreat and when Ulthuan must call for the ultimate sacrifice from her defenders.[1]