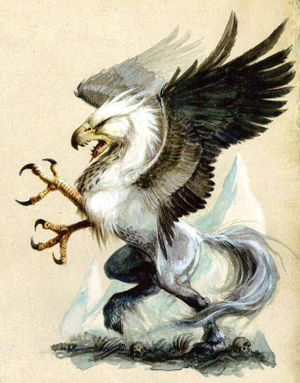 A Hippogryph is a hybrid animal that has the head and winged features of a predatory bird, the forequarters of a mountain lion and the rear end of a horse, complete with tail.

Like many similar hybrid species such as the Griffon, the origins of the Hippogryph is one formed from the unholy mutation of Chaos magic upon different species of animals during the earliest point in the world's history. The Hippogryph species inhabit the upper reaches of the Grey Mountains, occasionally prowling the green lands below for prey such as sheep and cattle, although they have also been known to hunt Humans, Greenskins or just about any creature than cannot quickly hide from its vision. Being a predatory animal, Hippogryphs are savage and highly aggressive in their nature and would attack anyone or anything with very little to no provocation or warning.[2a]

As you might expect, the Hippogryph species are unnaturally bloodthirsty animals who would wantonly slaughter every animal on sight, not necessarily for food but as a simple act of pure aggression. In fact, a Hippogryphs desire for warm flesh is so great that those around them can literally sense their terrible hunger. Survivors of a Hippogryph attack often keep a sharp lookout skywards for years afterwards. They are unrelentingly territorial and will fight to the death against any creature that strays into their chosen domain. [2a]

As such, it is of little surprise that most solitary Hippogryphs tries to give each other a wide berth. When Hippogryphs do meet, they are likely to come to blows, typically in a violent and bloody battle that will last until the death of one or both creatures. The Hippogryph possesses a ferocious instinct, rather than a fearsome intellect like other more intelligent animals like the Pegasus. Whilst hunting, its uncomplicated mind naturally assumes that a prey out of sight is a prey that has evaded it forever. Thus a Hippogryph prefer to swiftly close the distance between itself and its chosen prey before there is even a chance of escape. Victims that do elude a Hippogryph are quickly forgotten and the beast will look elsewhere for a more immediate gratification.[2a]

Hippogryphs are the favored mount of Bretonnian knights who want a creature with a more vicious nature than the more noble and gentle tempered Pegasus. It takes the most committed of men to ride one of these beasts to battle, for Hippogryphs are strong-willed and ill-tempered, more than willing to fling their rider from his saddle should he prove lax upon the reins. In order for a Knight to successful tame a Hippogryph, he must be able to raise it from a chick by the Knight himself. He must accept no help in taming the beast, for the Hippogryph will never accept him as a rider should he do. Even a young Hippogryph is capable of defending itself, which makes taking the beast along on adventures more practical.

Eggs or young chicks are sometimes collected by adventurous Bretonnian peasants from their nests high in the Grey Mountains, and then sold to their nobles for massive amounts of gold - assuming that the peasant even makes it out of the mountains alive. Only the richest and greatest knights can afford such a beast, with Grail Knight owners often forming part of the elite "Royal Hippogryph Knights".

They are found throughout the Grey Mountains.[2a]

The most famous Hippogryph is called Beaquis, belonging to the mighty King Louen Leoncoeur.