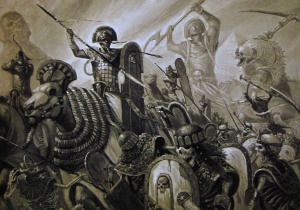 The living and dead of Nehekhara at war

Nehekhara was the first human civilisation to emerge in the Warhammer world, originating as a cluster of kingdoms, all of which eventually came under the nominal rulership of the King of the city of Khemri.[2a]

For millions of years, he and the other gods dwelt in the Great Land before the coming of men. After this time they became invisible spirits, but able to take on a form of their choosing.[1a] Legends state that Ptra led the other gods against the gods of Chaos riding in his golden chariot, daemons recoiling from his divine touch. Eventually victorious he and the other gods transformed the land into a verdant paradise later called Nehekhara. [2a]

More than 2,500 years before Sigmar, the people of the land built a great civilisation creating roads, cities fleet to connect with each other, raising powerful armies to destroy any that might invade their lands. The greatest city was Khemri, with its king considered the first amongst equals. Their domains expanded as far as the area now claimed by the Empire, the Southlands and the even into the Great Ocean. [2a]

Finally the rulers of the cities each determined that they should hold supreme power and began to war upon each, each claming the Crown of Nehekhara. Other races saw opportunity and attacked with the Greenskins descended from the north as did barbarian tribes and Lybaras was sacked by the Lizardmen. Plague and drought struck the land and the whole civlisation stood on the brink of collapse. [2a]

In -2500 IC,[2e] the new king of Khemri was called Settra and although cruel, vain and arrogant he also paid homage to the gods of the land, restoring their temples and creating new statues to their glory. On his first anniversary, he begged the gods to restore Khemri to its lost glory and sacrifced his own children to them. He was rewarded by the Great Vitae River flooded, washing away disease and providing a plentiful harvest. Settra awas annoited as not only a ruler but a Priest King who wielded the pwoer of both his people and the gods. [2a]

Now his legions marched, subduing all the other cities and and once more establishing Nehekhara as a mighty empire. The empire fought off the Greenskins to claim new land and defended against the desert dwellers who stole food and pack animals. His armies and fleets ranged as far as Lustria but as he grew older he searched for the cure to death [2a] forming the Mortuary Cult but although they prlonged his life, eventually he too succumbed to death in -2350 IC,[2e] angry and frustrated. The Cult promised that he would awaken in a golden paradise to rule for a million years and his body was placed within a great tomb in a pyramid that loomed over Khemri. [2b]

After his death, the various kings and cities vied for status and riches, although they did not revert to all-out war. Expansion slowed and stopped, although the desert nomads were conquered and wars fought against both Greenskins and Lizardmen. Throughout this period the Mortuary Cult continued to grow in knowledge and power, becomming Liche Priests but although they could prevent death, they did not retain their youth. The gods Djaf and Usirian became more and more prominent, as much or more so than even Ptra himself, changing the Great Land. [2b]

Prior to the time of Nagash, Nehekhara was at its peak, its people wealthy and its lands beautiful but Nagash would change all of this. He was originally the High Priest of Khemri but was still not content. He plotted to seize the throne from his younger brother Thutep and become both King and High Priest. One night in -1950 IC [2e], he had the young king killed and placed in the tomb of Khetep. The next morning, he proclaimed himself king and sat upon the throne with no-one daring to confront him. [2c]

The reign of Nagash was one of pain and suffering for the people. He demanded total loyalty and massive tributes from the princes appointed to rule the lands. He had the Black Pyramid of Nagash built, towering over all others. He also created an "Elixir of Life" using human blood, which would be drunk by Nagash's closest followers, including Arkhan, and later recreated by Neferata, the Queen of Lahmia. Due to the high tributes, starvation racked the lands, but Nagash didn't care. [2c]

Eventually in -1600 IC,[2e] the princes had had enough and rallied their armies to attack Nagash and Khemri. To defend against these invaders, Nagash summoned long dead warriors to do his bidding, the first time that the dead had walked at the command of another, and many fled in terror from the battle. Eventually, after a titanic battle, Nagash was defeated. Many believed him dead and destroyed, but he had actually escaped to the north to plot his revenge, his Black Pyramid abandoned for hundreds of years, but he had vowed revenge on the living. [2c]

The Priest Kings continued to rule the land, recovering slowly from the famine that struck the land in the wake of the great war against Nagash.

In the city of Lahmia, Queen Neferata created a new but flawed version of the elixir of life and becomes the first vampire in -1520 IC.[2e] She shares this with members of her family, court and household, keeping their transformation, intially at least secret, but eventually their true nature was discovered. [2c]

Several centuries passed before the new great king arose - Alcadizaar in -1200 IC.[2e] A wise and charismatic leader, under his rule the land began to proper once more. New rules were imposed on the Mortuary Cult to prevent them following in the path of Nagash. [2c]

Fearing the wrath of the gods, King Alcadizaar led the armies of Nehekhara against Lahmia in -1170 IC,[2e] destroying the kingdom and forcing the queen and the other surviving vampires to flee. Nagash was in hiding in the mountains to the north and gladly accepted the outcasts from Lahmia who were all eventually drawn to him, whether they wanted it or not. He made them captains of his undead legions, and sent them south to conquer Khemri and all of Nehekhara but Nagash had badly underestimated Alcadizaar. [2c]

King Alcadizaar marched with a truly vast and unified army and they defeated the undead again and again before the final Battle of the Golden Skull saw the living driving the dead completly from Nekekhara by 1163 IC. [2c] [2e]

Nagash sought utter vengeance, and poisoned the waters of the Great River at its source, which in turn corrupted the lands which the river had once made fertile. Pestilence spread rapidly and the dead soon outnumbered the living. Alcadizaar could do nothing, for he could not fight this enemy with weapons. When Nagash attacked again he was met by little resistance. Nagash finished off the civilization of Nehekhara and took prisoner Alcadizaar, the last living Nehekharan. [2c]

It was after this that Nagash began the greatest spell of all time. The skies darkened for miles around and a great wave of energy left his body. All life was destroyed in seconds, crops withered and animals died. Now Nagash planned to raise the dead to make an all-conquering army which would overwhelm any opposition. [2c]

Nagash was assassinated by Alcadizaar, with the help of the Skaven, who freed the King as well as created the Fellblade, a deadly blade forged specifically to kill the Great Necromancer. Nagash however was still able to complete his ritual before his death, awakening all the dead of Nehekhara from their tombs. [2c]

Land of the Dead

The dead raised by the ritual were not bound to Nagash's rule, but only the Tomb Kings and Lich Priests were sentient. Having expected to be reborn as gods in the afterlife, the awakened Tomb Kings were enraged to find their bodies were little more than dessicated husks. The Tomb Kings then proceeded to reestablish control over each other and their now dead subjects and went to war with only the The Great Pyramid of Settra remaining silent. [2d]

It was the head of the Mortuary Cult, Grand Hierophant Khatep who broke the seals to the tomb of Settra as battles raged between the various rulers. Settra came forth with his legions and as in life, would allow no rival to his rule, destroying for ever dozens of lesser kings who stood against him until all present bowed their head to him, Arkhan the Black fleeing the area. So began the Reign of a Millions of Years.[2d]

This state of affairs has remained the same for more than 3000 years with the lesser Kings and Princes are (more or less) ruled over by Settra, first and greatest of the Priest-Kings. [2d]

Arkhan attacks the city of Bel-Aliad in -1149 IC fighting both the living and the undead of Neferata, all of who do not flee are subsummed into his army. The Lizardmen again invade in -917 IC defeating armies at both Bhagar and Ka-Sabar before they are destroyed before the gates of Khemri. Ogres of the Black Maw Tribe attack Quatar in -642 IC but are finally slaughtered by an army of animated statues from the Charnel Valley. [2e]

The alliance of King Rapesh of Numas and King Qu'a of Zandri seek to overthrow Settra in -645 IC who is saved from assassination by his herald Nekaph. The reulting battle between the two armies rages for seven days and nights but eventually Settra is victorious and destroys both kings. [2e] Between -236 IC and -241 IC, King Behedesh leads 7000 chariots to cleans the Badlands of greenskins. [2e]

About -150 IC, a marauding Norse horde invades Nehekhara led by Valgar the Butcher and is met in battle by Settra and his army. Valgar cuts down the Tomb King but only he and a dozen marauders escape the battlefield. [2f]

Arkhan reclaims the Black Tower in 111 IC and concludes an uneasy true with the other Tomb Kings. Between 120-170 IC, the Border Princes are invaded by King Setep, claiming much of them. In 210 IC, the War of the Hammer begins with a Dwarfs army marching on Mahrak to retrieve the Hammer of Algrim. [2e]

A great host of Daemons manifest in 666 IC, hard pressing even the army of Settra but a High Elf army arrives and together they two vanquish them before the Pyramid of Nagash. Vast spiders from Mount Arachnos attack Rasetra but are defeated by an unknown stranger. [2e]

A mercenary force led by Count Schwvaltz invades the Land of the Dead in search of treasure in around 1000 IC although only one solider escapes, his tales of golden artefacts spread far and wide. Zandri is atatcked in 1167 IC by a Black Ark. A ancient Dragon, Kalandrithir awakens in 1321 IC and rampages through Nehekhara, destroying much of Quatar before it is killed by a shot into its heart by a Necrolith Colossus. [2e]

The Great Terracotta wall is finally completed by King Ramhotep in 2141 IC but is then destroyed by Empire Steam Tanks, the king vows to rebuild it with the bones of his enemies. In 2150 High Queen Khalida is disturbed from her rest by Mannfred von Carstein - his horde is cut down by her archers and he is wounded and forced to flee after being confronted by the queen herself. [2e]

Graf Heimholtz, Grand Master of the Knights of the Blazing Sun attacks Numas in 2225 IC, slaying King Pharakh but himself is slain by Apophas. A temporary alliance between Arkhan and Khalisa sees them travel to Sylvania in 2350 IC where they destroy Mandregan and retreive the Staff of Nagash from his coffin. [2e]