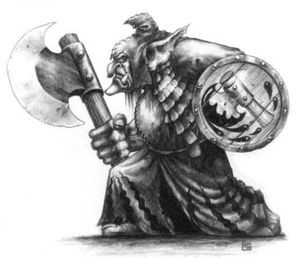 Hobgoblins are a sneaky, evil-minded race of Greenskins. Despised by their kin, the Hobgoblins survive by the grace of their adopted masters, the Chaos Dwarfs.

Hobgoblins, a larger variety of 'standard' Goblins, are found living out on the Eastern Steppes beyond the Worlds Edge Mountains where they are ruled over by the Khans, all of whom answer to the Hobgobla Khan, the greatest of the hobgoblin warlords. [3a]

Hobgoblins are known for being the most traitorous creatures in the world. "Backstabbing a friend" is often referred to literally in Hobgoblin society, so much that they have evolved a hard flat bone backplate where a stab is most likely.

During the height of the largest and most savage Black Orc rebellion the Chaos Dwarfs were almost overcome. Vastly outnumbered by their former slaves they were driven upwards through the layers of their city, fighting for each level, ascending ever closer to the Temple of Hashut itself. At the final hour the city was saved by the treachery of the Hobgoblins, who, having rebelled along with the Black Orcs, switched their allegiance once more and turned the tide against the Orc rebels. In doing so the Hobgoblins earned the enmity of the other green-skinned races who deeply distrust them to this day. They are considered so untrustworthy and underhanded by the other Greenskin races that they refuse to have dealings with them.[1a]

However, their efforts in the Black Orc rebellion caused the Chaos Dwarfs to employ them. Unlike the Chaos Dwarfs’ other slaves, they are not made to work in the pits and workshops, but are used as servants, slavers, and warriors. The Hobgoblins enjoy the favour from their masters and care little what other Greenskins think of them. For their part, the Sorcerers know this and use it as a check against possible Hobgoblin plots.[1a]

Some hobgoblins have become skilled with posioned curved knives from their exposure to Cathay. [3a]