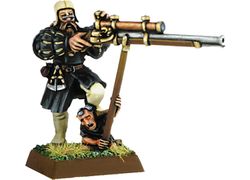 A Master Engineer armed with a Hochland long rifle.

The Hochland long rifle was developed from the long rifles used by the hunters of Hochland. [2]

These weapons use barrels which have been rifled or grooved, which makes the lead shot spin in flight, in turn making the weapons highly accurate and giving them a range unsurpassed by most other handguns (with an effective range that is half-again longer than the standard handgun). On the battlefield it is often used by marksmen as a sniper rifle, where it is particularly effective at neutralising specific targets from afar.