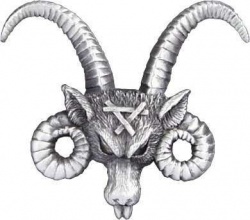 A common symbol of the Horned Rat and of his children, the Skaven.

The Horned Rat is the only god worshipped by the Skaven, his symbol is the rough equilateral triangle and his sacred number is 13. He is usually depicted as a great rat with curved horns.[1a] He is a deity of Chaos and longs for the destruction of civilization. Clan Pestilens focuses itself in his aspect of bringer of disease, plague and pestilence.Needs Citation

The Pillar of Commandments is held his most sacred gift[1b] to his children, the Skaven. Every candidate for the Council of Thirteen has to touch it,[1a] effectively surrendering his fate into the paws of the Horned Rat. Most perish immediately while others become his chosen ones.Needs Citation

His prophets, the 169 [1a] Grey Seers, are extremely influential throughout all Skavendom. Very important agents of the council, they also preach of the Great Ascendancy [2], a time in which the innumerable Skaven hordes will rise to the surface and finally conquer and enslave all surface nations. The centre of his cult is located in Skavenblight, the capital of the Skaven.Needs Citation

His arch-enemies are Sigmar, patron god of The Empire, and Sotek, the Great Serpent God of the Lizardmen.[3]

The Horned Rat is the supreme god of the Skaven, and he brooks no other gods before him. Though not affiliated with the Lords of Chaos, the Horned Rat is certainly a distant relative of those foul, nebulous beings. He represents all things the Skaven are, or wish to be. Undying and eternally scheming, this cunning deity patiently awaits the day of the Great Ascendancy, when his children will swarm across the face of the world, devouring it from within. Entropy is his mantra; decay is his stock in trade. All things must rot, figuratively or literally, and the Horned Rat and his offspring are the worldly reality of this simple truth.

All Skaven revere the Horned Rat. None question his existence. Such respect is a product of fear, for the Horned Rat’s eternal hunger does not discriminate between his vermin children and the dwellers of the surface world. A devout Skaven utters small prayers to the Horned God throughout the day, each prayer being a verbal slice of hate, envy, or malice. These prayers are answered often enough to give the Horned Rat validity in the minds of his adherents, even in cases when divine intervention is obviously not involved.

Blood sacrifice is common in the day to day worship of the Horned Rat. The Skaven fear that if the Horned Rat’s appetite is not satisfied, he will devour his children instead. The form of the sacrifice—a slave, Skaven or otherwise—is not as important as the sacrifice itself. There is no specific doctrine that governs who or what must be sacrificed. The sacrifice itself is enough to sate the Lord of Decay for a brief time. Young victims are considered to be the most potent sacrifices for the Horned Rat, while the blood of the aged and infirm is less desirable.

The number of sacrifices made to the Horned Rat by his followers varies considerably depending upon their need. In times of war, the number of daily blood sacrifices can be staggering, sometimes numbering in the thousands in the great Skaven cities of Skavenblight or Hell Pit. The Skaven also increase the number of daily sacrifices if they fail to secure victory in battle, or suffer some other embarrassing setback. The Grey Seers preach that victory cannot be won if the Horned Rat is unsatisfied with his minions, and thus, any defeat or failure is a sign that he must be appeased.

Religious services are constantly held by the Grey Seers in honour of their sinister god. All Skaven are expected to be present at a mass at least once a day, even though no formal records of attendance are kept. Those who do not attend services open themselves up to all manner of criticism, including accusations of heresy, treason, and atheism. Influential Skaven warlords contract their own spiritual advisers from the ranks of the Grey Seers, and these priests for hire give private services to their employers and their households.