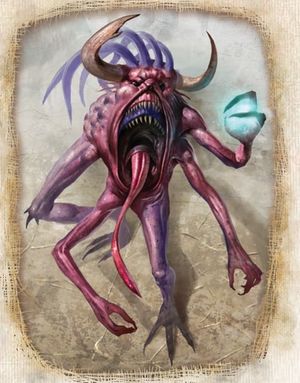 Horrors or Tsani'Kchami'i are Lesser Daemons and the most prolific of the Daemons of Tzeentch and are formed from pure magic. [2a]

The Horrors come in two main forms and colours but vary otherwise greatly in appearance.[3a]

Units of Horrors are often accompanied by Flamers of Tzeentch, and among their ranks are also champions, standard bearers and musicians, whose standards and drums are organic parts of their bodies. In battle they band together in packs in order to unleash their powerful magic upon their enemies, blasting foes with eldritch fire. [3a]

As they scamper and caper across the battlefield, Pink Horrors continually and unnervingly cackle, the air around them filled with tiny strands of punk magic, the ground itself smouldering with rosy light. Casting spells fills them with increased joy and even death satisfies some complusion as when they die a pair of Blue Horrors are birthed from a blob of magic. [2a][4a]