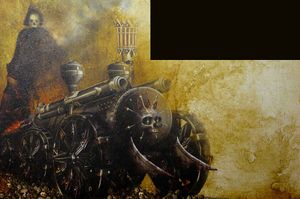 The Iron Daemon War Machine is a powerful vehicle and war engine of the Chaos Dwarfs. [1a]

A powerful but relatively compact steam powered traction engine that can act not only as a formidable war engine in its own right, but can also haul heavy weapons and ammunition or fuel to and from the battlefield. [1a]

A number of these machines had already proved themselves in service to the Legion of Azgorh at the Black Fortress and some were part of the force that Lord Drazhoath took to accompany the legion when it joined Tamurkhan in invading the Border Princes and then the Empire. Drazhoath was keen to match the technology of the Chaos Dwarfs against that of the Empire and they would indeed be given a chance to prove themelves. [1a]

In battle may haul several carriages and these may be powerful war machines in their own right. [1a]