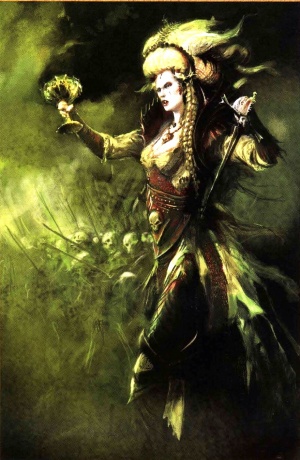 Darkly beautiful and quick witted, the marriage with Vlad soon developed into love and devotion on both sides with Vald long resisted her pleas nto join him in undeath. Finally as she was struck down with a wasting illness he granted her desire. She was his most trusted confidente and the only one whose advice he trusted. [1b]

Isabella was the daughter of Otto, last of the mad von Drak counts of Sylvania. On his deathbed, without a male heir, he swore he would rather marry his daughter to a daemon than let his brother Leopold inherit. Then, one stormy night, a black coach arrived at Castle Drakenhof and a stranger demanded entry. He had a strange accent, but he was a noble and called himself Vlad. He had come to claim Isabella's hand. Unwilling to give his daughter to any noble from Sylvania, and because of his oath, Otto agreed to the marriage. The ceremony was performed before the dying count's bed, and when it was complete, the last von Drak expired. With his death Vlad von Carstein became the new count of Sylvania.[1a]

However, what began as a marriage of convenience had, over time, grown into something much more. After a few years of his rule, Isabella had fallen sick with an incurable illness. Unable to be cured by the doctors, Vlad dismissed them. He could not imagine spending the rest of eternity without her, and so gave her the blood kiss. She was ever afterward pale and never left her chambers save by moonlight.[1a]

Together, Vlad and Isabella firmly ruled Sylvania for many years and were unchanged by time. In the meantime, many of the nobles were also plagued by the same disease the Isabella had, and soon, castles in Sylvania were home to nocturnal and long-living folk. [1a]

When Vlad assembled a nightmarish army of undead and alive alike, and was ready for conquest, he declared war on the Empire. It would be decades before he was finally stopped at the siege of Altdorf. Robbed of his magical ring, he died one last time, when Grand Theogonist Wilhelm flung himself and Vlad on battlements and both were impaled on spikes. With a terrifying scream the count of Sylvania expired. Realising that her beloved had been destroyed, Isabella threw herself on a stake and crumbled into dust.[1a]

During the End Times Isabella was restored to unlife by the Dark God Nurgle, who warped and twisted her into an ideal tool for destroying the undead. Possessed by a daemon, she led a huge army of Nurgle daemons to invade Sylvannia alongside the Nameless.

First they defeated an army led by Mannfred von Carstein and Luthor Harkon, two of Nagash's Mortarchs when the Nameless was able to wrestle control of their zombie hordes. The Mortarchs, joined by Vlad, retreated to an abandoned inn called the Dead and Buried where they and a small number of other vampires fought a last stand against the Nurgle army. Eventually they were overwhelmed; Mannfred fled the battle, Harkon was killed by Isabella herself and all of the other vampires were slain too. The exception was Vlad who taunted Luthor Huss, trapped inside the body the Nameless now controlled. He questioned the priest's strength and faith until eventually Huss broke free in a burst of fiery faith that immolated the Nameless. Together they fought the hordes and Vlad escaped the battle.

Building on these victories Isabella led her forces into Sylvania where she marched on the Black Pyramid, the centre of Nagash's power. The battle however proved only to be a distraction after a Skaven team (who have now joined the forces of Chaos) led by Ikit Claw destroyd the Pyramid, a major repository of Nagash's death magic. This loss forced Nagash to finally join forces with the other Incarnates in Athel Loren. After the battle Isabella travelled to Middenheim to join Archaon's forces there.

During the Incarnate's invasion of Middenheim Isabella once again confronted her husband. They fought but he was unwilling to destroy his one true love. He removed his ring, forced it on her finger and threw them both from the battlements onto the sharpened stakes below, mirroring his earlier death at the hands of the Grand Theogonist in Altdorf. Her death destroyed the daemon, freeing her of its influence while the power of the ring returned her to unlife. After the battle she was found by Neferata who took her to Castle Stierniste in Sylvania where alongside Khalida she waited out the ending of the world.