Island of the Flame 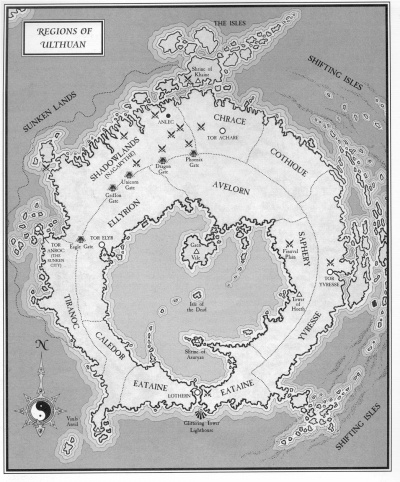 The Island of the Flame is located in the South (lower half, centre), just above the entry Shrine of Asuryan.

The Island of the Flame is located inside the Sea of Dreams of the Inner Sea, relatively close to Lothern, capital of the High Elves. Belonging to no individual realm[1a][2a], its main feature is the Shrine of Asuryan.

The Shrine of Asuryan is a pyramid temple dedicated to Asuryan and zealously protected by the Phoenix Guard. Upon the death of a Phoenix King, the High Elf princes gather in the shrine to choose his successor, who then has to pass through the Eternal Flame of the Phoenix[1b][2b].

All High Elf nobles are expected to make a pilgrimage towards the shrine at least once in their life[2c][3b].

Massacre at the Shrine of Asuryan

Malekith came to the council wearing his sword and accompanied by armed knights, even though it was forbidden to carry weapons into the holy shrine. Malekith argued that he should be Phoenix King. When many of the the princes refused, Malekith drew his sword and his knights began slaughtering the unarmed princes. Malekith then stepped into the flame of Asuryan and was horribly burned. His retainers carried their near-dead prince away and left the shrine.[4c]

More than half of the ruling princes of Ulthuan were killed in the massacre.[5c] Those slain included: