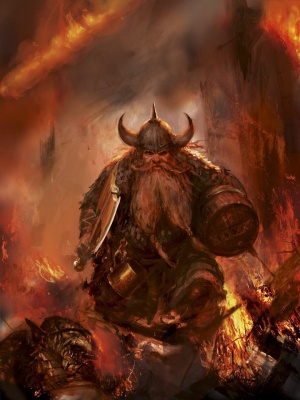 Josef Bugman is the most legendary Master Brewer of all time. This is really saying something, for Dwarfs take their ale seriously, and there are many famous brews and renowned brewers, yet still, the name of Bugman stands as a paragon of quality. [1a]

The brewery started out when Josef Bugman's father, Zamnil set up the family trade in the eastern forest of the Empire. He built a stout brewhouse beside the crystal clear waters of the River Sol where it cascades down from the foothills of the Grey Mountains. In order to sell his ale more readily in the Empire, Zamnil took the name of Samuel Bugman, and when his son was born he called him Josef. If Josef ever had a proper Khazalid name, it was never recorded. After his father's death, Josef expanded the business and acquired a considerable reputation for the fine quality and potency of his ale. It was easy for Bugman to ship his barrels on barges down the rivers to the great cities of the Empire, where it proved very popular. Soon Bugman's brewery had grown into a small Dwarf settlement and other families came from the Grey Mountain to join him.[2]

Within a few years, Bugman became a prosperous brewing merchant and a reasonably content Dwarf. With triumphs like Bugman's XXXXXX and the notorious Troll Brew to his name, he was already famous throughout the Dwarfen realms. His small community lay well off the beaten track and was usually ignored by any armies or raiders rampaging through the region.[2]

One day, Bugman went up river with a shipment of Bugman's Special Brew for the Emperor. As he returned home, he saw the smoke gently rising from his brewery among the trees and thought it was time that the great chimney was swept. When his barge rounded the bend of the river, Bugman saw the smouldering ruins of his settlement. A Goblin raiding party had found the brewery, with all the ale having been consumed in a drunken orgy of destruction. The vats were smashed, empty barrels floated on the river and there was no sign of any inhabitants. Every last one of them had been taken off by the Goblins to who knew what fate.[2]

Bugman and his remaining companions swore vengeance on the Goblins for this foul deed and resolved to hunt them down and rescue their kinfolk if they could. The band trailed the Goblins across the World's Edge Mountain and into the wilderness beyond. Little was heard of them again except for rumors of the ravages of Bugman and his Dwarf Rangers, of cunning ambushes and night raids against Goblin camps. Sometimes, the band would suddenly emerge from the wilds, tattered and blood-stained, to join up with a Dwarf army before a great battle with the Goblins. They kept to themselves, huddled around their own campfire, with a strange glint in their eyes and their hands clasped around tankards of Bugman's ale. So has the legend of Josef Bugman persist to this day.[2]

During the End Times, he appears and comforts High King Thorgrim. He tells the King "as long as there are mountains, there will always be dwarfs beneath them." Later, during the last stand of the Dawi, he, alongside Gotrek Gurnisson, acts as a shieldbearer for the fabled White Dwarf. It is assumed he perished during the final battle.[3]