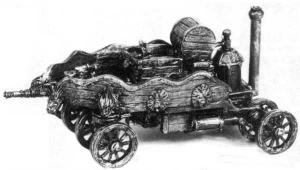 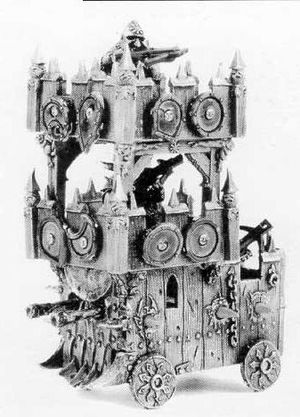 Juggernaut is the name for a number of unrelated warmachines.

The Chaos Dwarf Juggernaut is a mobile weapons platform, somewhat similar to a short Siege Tower, with multiple levels and a cannon. The Juggernaut is pushed by a Boar Centaur. The base level was a war wagon or cart containing two small cannons or guns. Above this were a number of levels with battlements for Chaos Dwarfs to fire from. There was no upper limit to the number of levels the machine could be built with. Theoretically it could be used as a siege tower.Needs Citation

The Dwarf Juggernaut is a steam-powered wagon that can be armed with smaller cannons or organ guns.Needs Citation