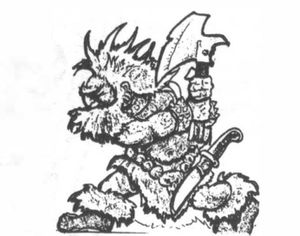 Juggo Joriksonn is a Norse Dwarf Berserker living in Lustria. [1a]

He is in the habit of dyeing his hair torquiose and greasing it with pig fat which means it sticks out at surprising angles whilst his most striking feature is his sunken, bloodshot eyes and his awful complexion. [1a]

In Lustria he joined the crew of one Erisch Hamstringsonn, a well known raider, they plundered successfully until they were confronted by a substanial force and most were killed with only a few including Juggo escaping on a longboat. When it drifted down river into a Norse village, all the survivors were unconscious from poisoned blow darts with only Juggo surviving to recover consciousness. [1a]

Although he sent most of the treaure to the relatives of his leader, he still had enough to go on a now legendary drinking binge for the next year and a half. [1a]

Once the money ran out he joined the crew of the river boat of Sven Hasselfriesian, the Voltsvagn. [1a]