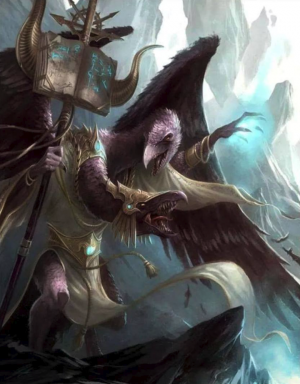 Kairos Fateweaver, is a Lord of Change known also as the Oracle of Tzeentch, the Keeper of the Destiny Scrolls, and even the Mocking Watcher.[1]

He is perhaps the most powerful Lord of Change due to the actions of his master, the Changer of Ways and the Daemon now knows every spell in existence, and every action before it's conceived. Ever since he clawed his way back from the Well of Eternity after years uncounted within its depths, Kairos can see things that are hidden even to Tzeentch.[1]

His right head sees possible futures as clear as day. No scheme is hidden from its sight and the infinite possibilities of tomorrow crystallise into irrefutable fact. Kairos’ left head sees the past without the petty colourations of perspective and bias. Past and future pulse through a body shrivelled and twisted by its passage through the Well. Valuable as this vision is, it comes with a heavy cost. Both of Kairos’ heads are blind to the present; he cannot see time as it passes — only events that are to come or whose time has already lapsed.[1]

Kairos’ blindness to the present makes him vulnerable to physical attack — the future does not reveal itself swifty enough to predict battles to and fro. Nevertheless, Kairos’ unique vision allows him to stay one step ahead of adversaries, pitting various assailants against one another in timestream-straddling duels. In the arena of magic, Kairos is unstoppable. He knows every spell in existence, every sigil, sign and quirk of mystical power; though even he cannot marshal them all without a modicum of preparation. Such ability makes him Tzeentch’s favoured agent. On the occasions Fateweaver leaves the Impossible Fortress it is always in the service of a dire task, be it the recovery of a magical artefact, the predestined crushing of an army, or some other ineffable purpose.[1]

Even Tzeentch dares not enter the Well of Eternity, the vast receptacle of knowledge at the heart of the Impossible Fortress. The Great Sorcerer, mighty though he is, cannot be sure of survival within the inky currents of infinity. Still the Well of Eternity holds great sway over Tzeentch’s mind, for it is the one puzzle he cannot solve, and the one mystery he cannot know — a challenge almost painful in its intensity. It was in the cause of understanding that Tzeentch hurled Kairos, a Lord of Change known as the Fateweaver to mortals, into the foreboding depths of the Well. While the Great Sorcerer was not prepared to risk his own being in such a venture, he had no such misgivings at risking one of his servants in such a fashion.[1]

Since he clawed his way back from the Well after years uncounted within its depths, Kairos, known also as the Oracle of Tzeentch, Keeper of the Destiny Scrolls, and Mocking Watcher, can see things that are hidden even to Tzeentch. His right head sees possible futures as clear as day. No scheme is hidden from its sight and the infinite possibilities of tomorrow crystallise into irrefutable fact. Kairos’ left head sees the past without the petty colourations of perspective and bias. Past and future pulse through a body shrivelled and twisted by its passage through the Well. Valuable as this vision is, it comes with a heavy cost. Both of Kairos’ heads are blind to the present; he cannot see time as it passes — only events that are to come or whose time has already lapsed.[1]

Kairos now sits at Tzeentch’s right hand, stirring the stygian depths of the Well as he whispers aloud the secrets that only he can see. Nine times nine Lords of Change transcribe these insights with quills drawn from their own plumage and inked with Tzeentch’s blood. Each scribe jealously guards the secrets he hears — every such facet of eternity is a powerful tool in the unending intrigue and collusion of Tzeentch’s court. For his part Tzeentch cares not about the scheming of his minions, for he knows all that they know. Each secret transcribed by a Lord of Change is made a part of Tzeentch forever and his understanding of eternity comes ever closer.[1]

Kairos plotted the downfall of Xahutec, the first of the Temple-cities of the Lizardmen to fall - as daemonic hordes battered at its defences, he managed to open a warp rift at its very heart. Packs of Flesh Hounds, all but immune to the magic of the Slann tore the mage-priests and their retinues apart causing the remaining magical defences to collapse. As the hordes rampaged through the city, Kairos devoured the arcane artefacts of the dead slann before destroying their pryamid. He then repeated his success at the cities of Huatl, Tlanxla and Xhotl but the priests of the last managed to alert their kin of this method of attack. [3a]

He was one of the four greater Daemons sent to fight Aenarion who was defending the ritual that would create the Great Vortex and was the first of the them to be defeated by the Phoenix King. At this time he only had the single head. [2a]

In 2031 IC he brings 5000 Daemons to besiege the city of Montfort in Bretonnia and the subsequent Battle of Sky's Fall is recorded by the bard Tyness Evain. [3b]

He was one of the Daemons that slew the High Elf Lauraen the Sage when she was lured by false visions to a valley south of Salzenmund in 2512 IC. [4a]

The sorceress Morathi attempted to summon and bind Fateweaver to her will upon the Wretched Altar in 2522 IC but the Changeling disrupts the black ritual mispronouncing a single syllable. A host of Daemons took possession of many acolytes resutling in the Battle at the Wretched Altar which Morathi barely survives. [4a]

The End Times - The Year of Woe

In the year 2520 IC, as mortals reckon time, was when Tzeentch sent Kairos Fateweaver to steal the twelve enchanted artifacts once possessed by the fearsome Grail Companions of Gilles le Breton. So important was this goal to Tzeentch that he dispatched the greater part of his armies to the mortal plane. So began Bretonnia’s Year of Woe, where the tombs of the companions were ransacked, nearby towns razed and countless thousands of Bretonnians — high and low born alike - met their deaths at the tentacles of Tzeentchian Daemons. Castles were of no defence, for their crude stones were easily tumbled by the sorceries of Pink Horrors or transmuted by the warpfires of Flamers. Only at Grail shrines, where the power of the Lady still waxed strong, could any shelter be found. Worse, with each artefact recovered, Fateweaver’s Daemons grew ever more powerful. In the initial battles about Montfort and Quenelles, the lances and valour of the Bretonnian Knights cost the daemonic hosts greatly. By the time eight artefacts had been seized, only the boldest dukes would even consider taking the field. In the twelfth month, with only a single artifact outside of Fateweaver's clutches, only King Louen Leoncoeur chanced his arm — and he lost far more battles than he won.[1]

The final battle of the Year of Woe was the Siege of Mousillon, for ’twas in this city that the last artifact lay. At the height of the siege, the Bretonnian armies made one last sortie against their abusers. As they did so, help arrived from a most unusual source. Nurgle had long been fond of Mousillon, for it had been the breeding ground for many of his favourite plagues. He could not bear the thought of the city being eradicated by the minions of hated Tzeentch, and so loosed his own armies. Unaware of the wider battle being fought, the Bretonnians gave no quarter that day. They saw only an army of Daemons given over to fighting amongst itself, and slaughtered everything that came before their lances. Ku’gath Plaguefather bludgeoned Kairos Fateweaver to feathered ruin, only to find himself pierced on the points of a dozen blessed lances. With the destruction of their leaders, both Daemon armies vanished — doubtless to pursue the battle on more familiar territory — leaving only their battle-ravaged fallen and the very items Fateweaver had come to steal.[1]