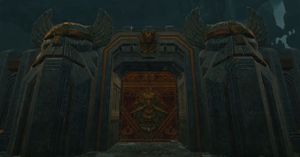 Gates of the Hold

Karak Zorn is a legendary lost hold of the Dwarfs located in the southern Worlds Edge Mountains deep within the Southlands.

Almost all tales told of Karak Zorn are about its fantastic wealth; in fact the hold itself is said to be built of a wealth of gold and ivory. Besides these fantastic tales, it is generally believed the hold is surrounded by steaming jungles inhabited by Orcs and other hostile creatures. Maps showing the location of the hold place it at wildly differing locations. The Dwarfs have yet to ascertain whether the hold still exists, or even if it ever did.

Word was sent to the High King shortly before the War of Vengeance that although riches were plentiful in the area, the wells were drying up and they encountered saurian beasts. [2a]

Contact with this hold was lost several centuries ago and although Lizardmen records speak of strife involving Karak Zorn in -2000 IC. [1a] Nothing else is known.