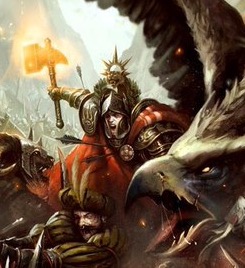 Emperor Karl Franz I, Elector Count and Grand Prince of Reikland, Prince of Altdorf, and Count of the West March[1] is the current Emperor of The Empire and Elector Count of Reikland. He is widely regarded as the greatest statesman and diplomat of the Old World. [5a]

As Emperor, Franz is also the leader of the Imperial Army and has commanded it in numerous battles (most notably the battle of Norduin against the Bretonnians, the battle of Bloodkeep and the most recent Storm of Chaos).

He was born in 2470 IC and later that year, he, his parents and older sister were tavelling through the Drakwald and had stopped for the night at the Black Boar coaching inn. There they were attacked by a large Beastmen host but were saved by Wood Elves. One Elf claimed that the baby boy was far too important to die, calling him Harathoi Koiran. [9]

As the son of the late Emperor Luitpold he was a logical candidate to become Emperor after his father's death. However in the Empire the Imperial throne is not inherited, but chosen by a vote of the Imperial Electors. [9]

Although the exact circumstances and precise details are unknown, it is likely that Karl Franz was considered far too young and inexperienced for the throne; he himself did not believe that he would be elected and Boris Todbringer, the count of Middenland, was the favored other candidate. The first vote was 8 against and only 4 in Karl Franz's favour, the remaining 3 Electors presumably abstaining. Maximillian von Königswald‏‎, who was an old friend and count of Ostland, managed to persuade all but one of the other electors to cast their vote for Karl Franz. The Church of Sigmar also supported him with 3 votes. In the end Karl Franz won the election. [7a]

With Oswald von Konigswald, he had planned for his coronation to take place at Castle Drachenfels as all the Electors would be there to see the play by Detlef Sierck.[7a] Although the Empress declined to attend, he travelled with their twelve year old son, hunting along the way where Luitpold was first blooded. [7b] Karl Franz was injured by Oswald when he revealed himself as a traitor [7c] and could only speak in a whisper for several months. [7d]

Shortly after his accession in 2502 IC, he lead an army to the aid of Nordland to repel a massive invasion of Norse barbarians. The Celestial College aids him to predict where and when the northern marauders plan to attack and a well-executed ambush devastates the invaders. The Emperor personally leads the Reiksguard in the final charge against the Norse shield wall. [10b]

During his reign, the Empire prospered, his armies victorious, the school of engineers and colleges of magic both growing. [5a] In 2507 IC at the Battle of Broken Pillars, Karl Franz leads the Reiksguard into the Underway to aid the Dwarfs of Zhufbar against Skaven. [10b]

He led his army to victory against Bretonnia at the Battle of Norduin, his charge breaking the flank of the enemy army before crashing into its rear. [5a]

In 2510 IC whilst hunting he was attacked by Beastmen and saved by a Hochland forest patrol at the Battle of the Weeping Glen. Following this and in recognition, the Hochland provincial banner was allowed to bear the Imperial Cross. [8a] Later that year he was badly wounded at the Battle of Blood Keep. [10b]

A number of settlements and forts along the Grey Mountains collapsed into the ground or were razed to the ground and Karl Franz, with much of the army went to Bretonnia to discuss the situation. [11a]

The Battle of Bloodpine Woods in 2517 IC sees Karl Franz lead an army to eradicate the Spiderclaw tribe of Forest Goblins. [10b]

When in 2520 IC, Orcs and Goblins streamed through Black Fire Pass in vast numbers, Marius Leitdorf sent word to Karl Franz warning him that his provincial army would not be able to hold them back alone. The Emperor marched south with the army of Reikland and Altdorf behind him, including a trio of Steam Tanks against the horde of Vorgaz Ironjaw in a confrontation that would become known as the 3rd Battle of Black Fire pass. [10b]

After a long and noble career, Karl Franz was eventually killed in the Battle of Heffengen during the End Times, slain by the vampire count Walach Harkon who had turned to Chaos.[3]

Karl Franz is unmarried but has two children by Lady at Court Maria-Luise von Walfen: his older son Luitpold (probably named for his Imperial grandfather), and a younger daughter, Alia.[6a] He has a sister, who is also married[*]

His named heir is Prince Wolfgang Holswig-Abenauer, his sisters son. [4]

Karl Franz's formal titles include Protector of the Empire, Defier of the Dark, Emperor Himself and the Son of Emperors, Elector Count of Reikland and Prince of Altdorf.[6a]

During the Storm of Chaos Karl Franz gave his magic hammer to Valten as a personal favour to the new Chosen of Sigmar. Eventually, Karl Franz entered in battle wielding his Runefang as Prince of Reikland.