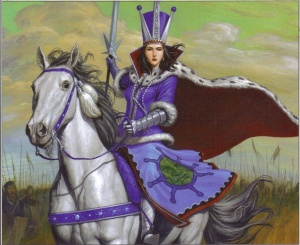 Katarin is the current Tzarina and absolute ruler of the land of Kislev. [1a]

She is titled the Ice Queen due to her aloof majesty and inscrutable nature as well as her mastery of Ice Magic. Like all rulers of Kislev, she is of Gospodar descent. [1a]

Court of the Ice Queen

The heart of Kislev’s government is deep with the Tzarina’s enchanted palace of ice whose ceilings, floors and walls are all constructed of magically fashioned and maintained blocks of ice. Consequently the temperature withing the palace is far below freezing but this only puts the Tzarina at ease although to ease the discomfort of her courtiers and visitors she has generously decreed formal court dress can include many layers of fur. [1c]

She does not require most people to sit on chairs carved from ice but her own her throne is carved from a single block of ice and assumes a different shape each day, helping further project her aura of majesty and power to even the most warmly dressed of petitioners. Rule of her court include: [1c]

Note that she may grant exemptions to these rules, and they do not extend to her own guards. [1c]

Katarin is the daughter of Tzar Boris Ursus and took the throne in 2517 IC after her father's death in battle. [1a]

It is said that when she ascended to the throne, the Bokha Palaces grew a whole new wing made of ice, half a mile long. This is beyond all but the most skilled ice mages and it is here that Katarin remains for most of her time. Some say she enjoys the cold, while others believe it to be an attempt to overawe all of her enemies and foreign ambassadors. [1a] She was also presented with a Matryoshka, or Kislevite nesting doll which contained 1,000 progressively smaller dolls within. [1e]

Before the Storm of Chaos, Katarin mostly remained aloof in the Ice Palace with very few of her subjects ever actually seeing her in person. [1d]

After reigning for only four years, her realm was invaded by the vast army of Archaon the Everchosen. [1b] she personally led Kislevite forces, lending her mastery of Ice Magic to the struggle against forces of Chaos and found that her direct aid inspired direct loyalty from her people, bypassing the local nobility, even if they were at her side in the battle. [1d]

Once the storm had abated, she created an army made up of Kossars, the Gryphon Legion, and some of the best horse archers in the nation. Now in the summer she leads them east and north, to safeguard regions of her nation threatened by raiders. The Tzarina makes sure to demonstrate her mastery of arcane power in any battle and also applies the rules of her court to any place she goes. This new policy has proved extremely successful bit is said that Katarin is still not entirely happy and she has hired outsiders to check on the loyalty of all her servants, including the chekist. [1d]

She disappeared during the End Times, refusing to abandon her lands. She is presumed dead.

Her power is drawn from the land of Kislev itself, giving her command of the harsh and cold elements. Katarin is the greatest of the Ice Mages, and is so suffused with the power of Ice Magic that even her flesh is cold and pale. Some whisper that she is the reincarnation of the first Khan-Queen Miska the Slaughterer.[1a]

This Tzarina, unlike her predecessor, leads from the rear and is aloof and remote, preferring to work through agents and generals. When she does go forth, she devastates all who stand before her, and the Ungol people to the north of Kislev believe and fear her to be one of the ancient warrior witches from their past. [1a]

The queen will have to fight more, as in recent times the Kurgans and Kyazak have been growing more bellicose under their Zars and Hetzars. The scale and ferocity of their raids has lead to The Empire dispatching a number of contingents to aid in Kislev's defence.

She rarely joins the armies of Kislev (or pulks) but when she does she is almost always mounted on her stead whose breath is said to be the winter wind, or she rides an armoured sled drawn by a team of identical beasts. She wields Fearfrost, a mighty magical blade forged by her ancestor, the Khan Queen Miska that only a Tzarina can use - a man would frozen solid should they even try to lift it. [1a]