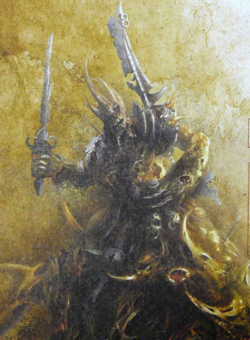 Kayzk the Befouled was a Kurgan Champion of Chaos who has given much in the service of his god, Nurgle the Lord of Decay.

He has given his flesh, which is now a rotting, pestilent mass, robbed of form and feeling. He has given his voice, for his vocal cords are no more than an open wound, and he long ago gave his soul to be the Plague Father's trinket.

Kayzk stands as a living (if it can be called such) testament to the full horrors of Nurgle's blessings, earning him the epithet 'the befouled' by those of the Plague-God's bleak faith. A mighty champion in his own right, Kayzk came to command his own warband of Kurgan horsemen, who followed his path of decay and became known as the Rot Knights for the fetid, half-Daemon beasts they rode into battle - vile, mutilated creatures whose cancerous flesh rapidly wept pus over any wound they sustained, suturing them shut.

Kayzk the Befouled was one of the first to flock to Tamurkhan's banner, joining with the Maggot Lord in the Chaos Wastes and sweeping down through the lands of the Kurgan at his side, serving as Tamurkhan's chief lieutenant and master of his mounted troops. During the Battle of the Black Pit, is said to have fallen, not to the shot or sword of the Empire's defenders, but in the Chaos Dwarf, Drazhoath's sorcerous fires as he led the ill-judged attack on the slave encampment to secure fresh sacrifices for his master's dark rites.