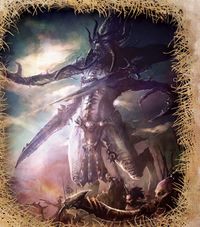 A Keeper of Secrets

Keepers of Secrets are the greater daemons of Slaanesh.[6a] [7a]

Corrupters of the faithful, Despoilers of purity and heralds of rapturous damnation they are full of the insidious magic of their creator, the Dark Prince. [7a]

Having delivered so many souls and performed such exquisite services a Keeper of Secrets may be permitted to suckle at the Dark Princes own divine power. They grow even mightier as pain and pleasure mix and ripple through their long-limbed bodies. [4a]

They are also known as the Base Ones, Despoilers of the Flesh, Feasters of Pain, Great Horned Ones, Slayers of Slaanesh. [5a]

A Keeper of Secrets has a large, bipedal form with multiple (usually four) arms and horned head. Two of the four arms possess claws. The appearance of the head varies greatly from one specimen to another, although many have jewels or other ornaments but no two Keepers have the same appearance. Some have a bovine aspect whilst others are far more androgenious. [7a]

==Nature These daemons are known for their typically Slaaneshi treatment of pain and suffering as another form of pleasure, and dispense that pleasure to their opponents with surprising speed and strength. Like daemonettes, their appearance is often cloaked in illusions but in addition to those minor illusions these daemons also tend to possess much stronger magical abilities.

The term 'Keeper of Secrets' comes from the belief that these daemons can hear anything said anywhere, and they are reputed to offer this knowledge in exchange for gifts and services.[5a]

Like all daemons of Slaanesh, a Keeper of Secrets has no fear of pain or injury and delight in the misery and torment of others. each blow or attack is carefully crafted to produce as much pain as possible or even just spill the blood in a pleasing pattern. [6a]

In battle, the Daemon makes each precise blow with care and attention, turning a swipe into a gouge and a caress into a bone-crushing embrace. [7a]

The original description in Slaves to Darkness emphasized 'a gloating, sadistic pleasure in killing and torture, and [they] exist only for the delights of carnage.' [5a] The daemons are depicted with horned bovine heads, four arms (some of which end in crab like claws), hove feet, one female mammalian breast, and wearing a mixture of leather and chain mail armor.

The basic description of the daemon has stayed the same, although the description has expanded to include the Slaaneshi penchant for illusion and trickery to manipulate their foes. Also, subsequent versions of the models have greatly reduced the clothing present and reduced or eliminated the hermaphroditic elements.