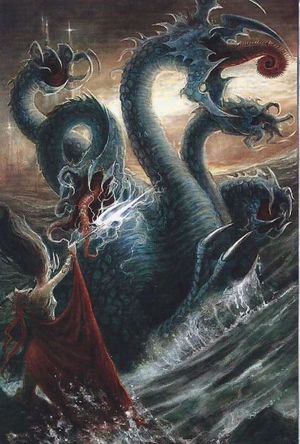 A Kharaibydss being raised from the depths by a Sorceress

The Kharibdyss is a monstrous creature that is dragged from the darkest depths of the ocean by a Dark Elf Sorceress. [2a]

The Dark Elf Beastmasters enlist a Sorceress to draw the creature up from the ocean to the land where they can capture and enslave it. [2a]

Many dwell in the deep ocean off the western coast of Naggaroth and even occassionally rise up from the depths to seek prey. [2a][3]

Like that of a troll, the stomach of a Kharibdyss contains extremely powerful acid and is able to digest bone, flesh and metal - although magical artefacts and gems are resistant and the belly of such a beast may have a treasure trove of such objects. [2a] Although a ocean dweller, they often come to the surface or even venture onto land to feed and if there is enough food for them will say there - their slimy thick body able to adapt to a variety of environments. [3]

This brutish and slow witted creature is goaded into battle where its horrific rampages induce unimaginable terror and carnage in the ranks of those unfortunate enough to find themselves facing it. Its five heads are able to attack multiple targets at once, and its sharp claws and lashing tail enable it to tear through the toughest armor with ease. It's scaly hide is also resilient enough to shrug off blows from all but the heaviest of weapons. [1]

As they are driven by their hunger and have little inteligence, they are have to be restrained from attacking allies during battle and beastmasters have been brutally slain after they lost control and a Kharibdyss ramaging through Dark Elf regiments. [2a]