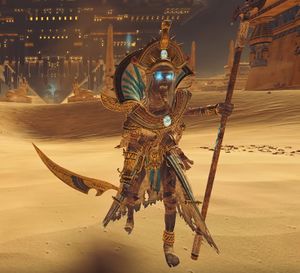 Khatep, Liche Lord of Khemri is the Grand Hierophant of Khemri and head of the Mortuary Cult's hieratic council. [1c]

He was the first of the Liche Priests to gain any form of immortality, not truly undead yet so old that he is hunched over and haggard beyond belief. He knows all of the secrets and unwritten law of the cult and is an extremely powerful wizard.[1]

Khatep was worried that, after Nagash's Great Ritual, civil war raging amongst the hordes of Tomb Kings would be the undoing of the land, so he single-handedly resurrected Settra who carved a path through the lesser Kings, and was soon once more the King of Nehekhara. Settra was incandescent with rage at the Mortuary Cult's lies as he had been promised a golden kingdom of immortality to return to, yet now he awoke to a destroyed land of rebellion and pestilence. [1a]

He exiled Khatep to find the secrets required to restore Nehekhara to it's former glory as the Golden Empire, and forbade him from entering any of the great cities until such a time as he completed the cult's most ancient promise of achieving immortality. He still wanders the great deserts seeking scrolls and relics that might help him achieve this goal.[1c]

He came to the aid of king Dhekesh of Mahrak when the Lizardmen invaded and were systematically destroying his army. He appeared and used his powers to silence the Lizardmen's magic and raised thousands of Skeletal warriors to his command before encircling and destroying the Lizard army. He then vanished into the desert before Dhekesh could thank him. [1c]

It is likely that in 873 IC he came to the aid of Rasetra when it was attacked by the dragon-sized spiders of Mount Arachnos. They were saved only by the magical intervention of a mysterious stranger. [1b]

He uses the Lore of Nehekhara. [1d]