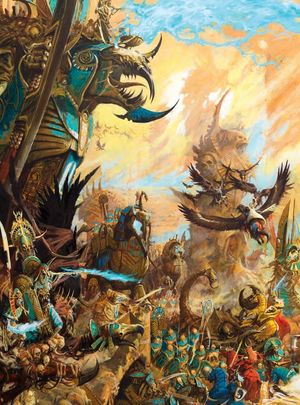 Khemri is the most important city of the ancient empire of Nehekhara. In its time it was the centre of the empire and the greatest of Nehekhara's cities. [1a]

It is located on a river now known as the Great Mortis River (originally known as the "Great Vitae River"). The land around was flat, surrounded by fertile flood plains and then expansive deserts, leading to Araby. The fertile lands provided ample food for the population and the flat desert around gave them advanced warning of incoming enemies. Its position on the river allowed it to command the trade routes to the east of Nehekhara.

Most other cities in Nehekhara, when not rebelling against its rule, paid vast amounts of tribute in gold, slaves and military units. This made Khemri the greatest centre of trade and finances, military power and it boasted the biggest pyramids for its dead.

As the empire of Nehekhara arose, Khemri became the greatest of the cities that arose in that civilisation and became, by tradition, the first amongst equals. The empire that they ruled extended in what is now the Darklands and Southlands as well as what is now the Empire. [1a]

However, internal strife and cival war engulfed Nehekhara and the civilisation began to falter - and then Settra was crowned king of Khemri in -2500 IC. [1f] Splendid and vain, powerful and cruel, he restored the temples ot the gods and beseeched them to aid him in restoring the glory of Nehekhara. For the first time in decades, and seemingly in answer to his prayers, the Great Vitae River flooded, washing away disease and granting a bountiful harvest. Settra would quickly be acclaimed as the first of the Priest Kings. [1a]

A great warlord, he made war on the other cities until each bent the knee, first Numas, then Zandri, Settra's army increasing with each victory. Ruthless and tyrannical, nevertheless Khemri and Nehekhara prospered under his rule with the great cities restored and the borders once more secure. The army and navy ranged out from their land, bringing back riches from as far as Lustria. [1a]

Unwilling to succumb to age and death, Settra created the Mortuary Cult to find for him the secret of immortality. However, although they made great progress in extending life, they failed to grant him that which he had demanded from them. Angry and bitter, Settra ordered that a vast pyramid be creating, then the largest ever monument built in Nehekhara. [1b] He finally dies and is entombed in -2350 IC. [1f]

When Nagash was born in -2000 IC [1f], as the eldest son he was given the rank of High Priest of Khemri but this was not enough for him. He also desired the title of King, and as such killed all in his way, [1c] forming a cabal of noblemen and unleashing a plague to kill their rivals which put them into positions of power. [2b]

He placed the current king, his own younger brother, Thutep in the tomb of King Khetep, their father to die and declared himself the new Priest-King of the City. [1c]

As his magical power and knowledge increased, he ordered the creation of a gigantic black pyramid and began to demand more and more tribute from the other cities. When some refused, his army marched upon them and the tribute taken by force from the conquered city. His pyramid arose, dwarfing even that of Settra and focussed the Winds of Magic for his use. [1c]

No longer willing to submit to him, Khemri was besieged by various kings leading the Army of the Seven Kings in -1600 IC [1f], finally united to destroy Nagash. After a long war, they finally succeeded at and executed Nagash's immortal lieutenants whilst Khemri itself was sacked, badly damaged and its population destroyed. [1c]

In -1597 IC after the death of her husband, Queen Neferata of Lahmia pledged to help rebuild the city at a council of the rulers of Nehekhara, offering 10,000 talents of gold every year until the work was completed. It was further agreed that the descendants of King Shepret of Rasetra would rule Khemri as the bloodline of its royal house continued through them. [3a]

Until -1200 IC, the city was rebuilt and ruled by a series of Grand Viziers, the last of which, Inofre brought the army of the city to the Golden Plain where Alcadizzar was gathering an army to attack Lahmia. There in the camp, Alcadizzar, son of King Aten-heru of Rasetra was finally proclaimed king of Khemri. [1f][3b]

Under Alcadizzar and his queen, Khalida, the city prospered and grew with centres of learning created both in Khemri and restoring those in Lybaras. Roads were improved to aid trade across Nehekhara and new methods of irrigation introduced. Alcadizzar was wise enough to ensure that the other cities also grew wealthy , forming for the most part, a strong alliance. [3c]

In 1168 IC, Khemri went to war with Zandri once more - after a difficult and lenghty campaign, King Rakh-an-atum fled, leaving a starving population - Alcadizzar spent the next five years restoring order, whilst Khalida managed Khemri. As memories of Nagash faded, more and more time was spent by the king travelling and confirming the need to prepare for his return. [3c]

Lord Rahotep made contact with the annu-horesh (mountain-lords) in -1163 IC with King Morgrim Blackbeard sending gifts to Alcadizzar. However, news came immediately after from Ophiria that Nagash had sent a great army emarked upon a fleet of bone against Nehekhara. [3c]

A much greater threat became clearer when Nagash himself returned in -1163 IC[1f], assailing Nehekhara with a vast army of the undead but against the mighty army gathered by Alcadizaar, they could not prevail and were defeated at the Battle of the Golden Skull. [1c]

Yet again Nagash returned in -1152 IC [1f] and this time he enacted a great ritual which poisoned the entire land and killed huge amounts of the population. Soon, the dead outnumbered the living. The king, Alcadizaar, was captured by Nagash and dragged to his citadel, where he was imprisoned. As Nagash continued to turn the living to the dead in his Great Ritual, Alcadizaar was freed by the Skaven and given a mighty blade to hack the Great Necromancer to pieces in -1151 IC. [1c][1f]

Yet his ritual had awakened the many ancient kings who emerged from their tombs and fought over control of the cities. Finally Grand Hierophant Khatep broke the seals on the pyramid of Settra who emerged at the head of a army struck down all that stood against him. None, not even Arkhan the Black could stand against him. [1c]

Enraged at the state of his land and his body, Settra commanded that the kings return to their tombs and that he would remain awaken and vigilant as he rebuilt the empire and watched for the return of Nagash. [1d]

In -917 a Lizardmen army is defeated at Khemri when the Liche Priests use the mirrored prisms atop the pyramids to focuss the rays of the sun. Settra himself is assailed by the legions of King Rapesh of Numas and King Qu'a of Zandri - a great battle is fought for seven days and nights before settra is victorious. He destroys the defeated kings pryamids and has their corpses burned. [1f]

In 666 IC, Daemons attack Nehekhara but they are finally defeated when a High Elf Prince allies with Settra. [1f]

Several locations in Khemri are renowned throughout Nehekhara. These can be huge pyramids, temple complexes, burial sites and spectacular sphinxes. Some of these include:

Khemri still stands to this day, but it is far from its former glory. It huge towers of gleaming gold and pyramids of shining limestone and alabaster are decaying from age, rotting like the corpses of the people. The Liche Priests are tasked with the preservation of such monuments but, like themselves, they still collapse under the weight of time. The priests may be timeless, but the monuments they protect are not.

It also contains a vast area known as the Necropolis of Khemri. It is a labyrinth of hundreds of smaller pyramids dwarfed by the Great Pyramid of Settra, and in turn dominated by the Black Pyramid of Nagash.[1e]

The great houses of Khemri controlled various powerful positions for centuries. [2a]

The ceremonial instruments of the king of Khemri are a golden sceptre surmounted by a golden sun-disc and a miniature golden shepherd's crook. [3b]

Before Khalida, the throne of the queen was placed to the right of the king and two steps lower, but on their marriage the thrones were placed side by side and at the same height. They were close enough that she could place her hand on his to show their unity and that they ruled jointly. [3c]