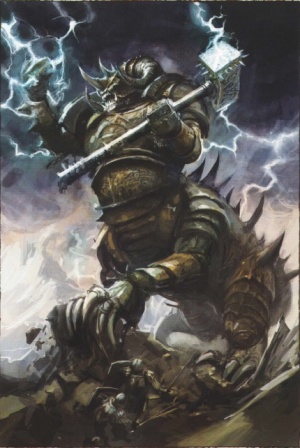 Kholek Suneater, Herald of the Tempest, also known as The Mountain Lord, is a powerful and ancient Dragon Ogre Shaggoth who fights for the Chaos Gods.

Every eight generations, when the malevolent moon Morrslieb waxes full in front of its benign cousin Mannslieb, a terrible storm rages through the crevasses and chasms of the World's Edge Mountains. Jagged ridges are silhouetted like the broken teeth of some titanic beast as lightning flashes and thunder roars. Before a great chasm that splits the mountains like a gigantic axe wound, hundreds upon hundreds of Northmen kneel in the pelting hail and snow, chanting sonorously as their captives are sacrificed and hurled bodily into a cavernous lair. Then, as the storm reaches its terrible climax, a terror from the prehistory of the world bursts forth with a roar that shakes the roots of the peaks themselves - Kholek Suneater awakes, and all the world trembles at his wrath.[1a]

Kholek is a Shaggoth of tremendous age. He is one of the first-born kin of Krakanrok the Black, father of the Dragon Ogres. Kholek was present when the terrible pact with the Dark Gods was forged, pledging their race to an eternity of servitude in exchange for immortality. The sagas tell that Kholek’s part in the bargain was such an affront to nature that the sun hid its face behind a bank of stormclouds and has never looked upon Kholek since that fateful day. True enough, Kholek’s coming is heralded by roiling black thunderheads. Where the Herald of the Tempest walks, a raging storm blots out the sun.[1a]

Like all Dragon Ogres, Kholek is energised and enlivened by the power of lightning, roaring with triumph as crackling bolts of pure power play across his ancient and scaly body. He wears great plates of brass as his armour, the better to attract the tempest’s kiss, encrusted with the patina of age and blackened by soot. In his shadow march the mountain tribes that worship him as a primal god of destruction.[1a]

In the year 1730 IC Kholek is freed from his glacial prison by the rogue Chaos Sorcerer Malofex. [2a]

Kholek Suneater was last seen by mortal eyes during Asavar Kul’s great invasion, striding south with his armies under the cover of a ferocious blizzard. The histories of that time describe a raging storm-beast tall enough to look over the ram parts of Praag, a god of winter who smashed his way into the city with pure brute force. The sagas tell of how the monstrosity stalked the Old Quarter of the city, demolishing each and every temple within the city walls before returning to his glacial realm.[1a]

If the rumours from the north are true, Kholek is abroad once more. Whenever the sky darkens with cloud and thunder rumbles on the horizon, all who know of the legend of the Suneater shiver in fear, for how can mortals stand against a being who has waged war in the name of the Dark Gods since before the dawn of Man?