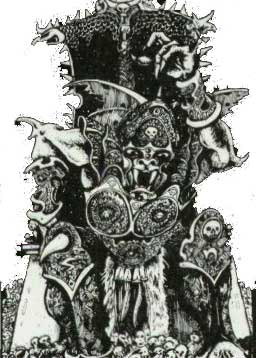 Khorne is the Chaos God of hate, rage and bloodshed. Every act of killing gives Khorne power; the more senseless and destructive, the better. Among the four great powers, Khorne is the most powerful of them all.

Khorne is the power of Chaos in its most violent and senseless aspect, a violence driven only by hatred and rage, and destroying friend and foe alike.

Khorne himself is seen as a mighty being of titanic size, clad in armour, and sitting atop a mighty and weirdly carved throne of brass worked in skulls, which itself is held aloft by a mountain of skulls standing in a sea of blood - the remains of his followers who have died in battle and all those they have slain.

As with his fellow Chaos gods, Khorne appears to be linked with an aspect of the sentient mind; in his case, it appears to be anger. This is probably the root of Khorne's dominant position in the pantheon, as such factious places as the Warhammer world would doubtless provide much sustenance for him.

The battle cry of the followers of Khorne reflects his desire for wanton violence: "Blood for the Blood God! Skulls for the Skull Throne!"

Khorne's symbol is a stylized skull rune. His sacred colors are red, black and brass - respectively, the colors of blood, death and Khorne's own armor. His sacred number is eight. All of this symbolism is represented in the dress, armor and organization of his followers.[1]

Khorne's foremost rival is Slaanesh, the two gods' powers coming from two diametrically opposed concepts. Khorne demands self-sacrifice and bloodshed for its own sake, whereas Slaanesh embodies self-indulgence, and bloodshed is merely one of a multitude of ways of exploring new experiences.

However, it must be noted that Khorne's followers do not act in order to cause pain because pain, as a counterpart of pleasure, is the domain of Slaanesh. Instead, while the followers of Khorne may express Khorne's rage, they wish only to kill so that the blood and skulls of their victims strengthen Khorne. The fact that the suffering and excess of this conflict also strengthens Slaanesh has been reported as further reason for conflict between Khorne and Slaanesh.

Khorne has no temples, as he is worshiped only on the battlefield, and the act of bloodshed is the only way to worship Khorne. A follower wasting time building a temple to Khorne would more likely attract the god's wrath than his pleasure. Worship of Khorne requires a life devoted entirely and selflessly to constant bloodshed. No follower lets a day pass without engaging in the bloody and enraged slaughter by which Khorne is worshipped.

Khorne despises sorcery, and the slaughter of sorcerers is greatly welcomed by Khorne.

All of the cults dedicated to Khorne are also warbands and can only be found outside the centers of civilization, in the deep wildernesses that putatively lie within the borders of civilized nations.