You may be looking for the capital city and seat of the Tzars: Kislev (city) 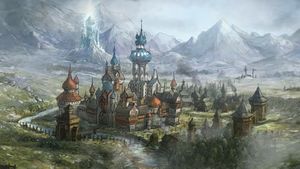 Kislev is a country located to the north-east of the Empire and is separated from the Chaos Wastes to the north by the Troll Country. It is the most northerly civilised nation in the Old World. Its current ruler is the Tzarina Katarin the Ice Queen.[2a] 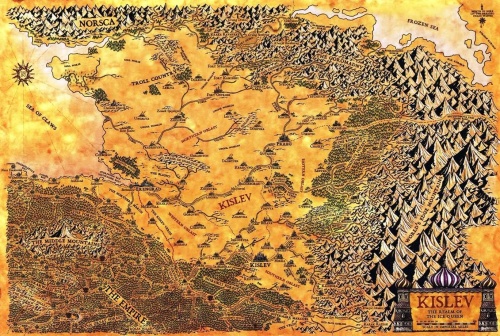 The empire borders to the south and west, the Sea of Claws to the west, Troll Country to the north and the Worlds Edge Mountains to the north-east and east. Although Kislev's southern boundary is drawn at the river Urskoy (a tributary of the Talabec), its northern border is much less well-defined. Many take it to be the river Lynsk, although some tribes live north of this river. [1a][2a]

The north of the country is barely distinguishable from the Troll Country and the tundra, although more wooded to the east in the foothills of the mountains. It is always cold and infertile land and most who live there are nomads, moving from one grazing ground to another. [1a]

The further south a traveller goes, the more hospitable the land becomes, though it is still chill all year round. There is generally a shortage of carved stone so most buildings use uncarved stone or wood,[1a] although this is not true for the palaces. These are built with gold in onion-shaped domes and towers. Due to the unforgiving landscape, there are only three large cities, Erengrad, Praag, and the capital Kislev.[2a]

The vast forests that cover so much of the Empire fade away in Kislev and instead there is the oblast - the broad, empty, frozen region. Without the woodland, there is little to interrupt the brutal wind that whips down from the north or northeast, scouring the steppe. However pockets of forest do still endure and some are said to be home to small communities of Elves whilst others are dominated by Beastmen, Goblins and Orcs. [1a]

The land is renowned for its grassy steppe with parched ground and dry air for only occasionally does rain come and then it is often torrential. Farming is hard and dangerous, only viable in the more fertile south and so many of the inhabitants are nomadic herders. [1a]

At the time of Sigmar, the lands were populated by the tribes of the Ungols, who also dominated the Ropsmenn. They shared many traits with the Kurgan peoples to the east, being horse-riding nomads. Around 1500 IC a large migration from the east of the Worlds Edge Mountains heralded the arrival of the people first known as the Gospodars, and then after the foundation of Kislev City, the Kislevites. They were wealthy people and easily took control as the Empire was in no position to counter them, having to deal with its own internal strife. The superior weapons and tactics of the Gospodars pushed back the Ungols to the west and north, where they then completely absorbed the Ropsmenn. Eventually, the power of the Gospodars grew and the city of Kislev was founded.

Around this time, Praag was growing due to the raids into the Ungol territory, which eventually forced the Ungols to accept Gospodar rule. Erengrad had also grown into a busy port of commerce ruled by the Kislevites, and from here they could sail into the Sea of Claws to trade or fight the Norse and occasionally the Empire.

This state has existed for 750 years, and Gospodar and Ungol society have merged over the years into Kislev.

Kislev is ruled by powerful warrior-sorcerer who practices a unique kind of sorcery called Ice Magic. The ruler of Kislev is the Tzar (or occasionally a Tzarina) who ascends to the throne through birthright, although they all originate from Gospodar heritage.

The use of Magic by specific people has long been accepted by its people, Kislev was founded by a Ice Witch, is supported and protected by witches, and is currently ruled by a Ice Witch. In Kislev, magic is solely practised by women and consequently seen as a feminine art with any visiting male spellcasters often becoming figures of hatred and/or ridicule, for no sane man would risk his soul by meddling with womanly matters. [1d]

Ungol women learned to cast magic without using the mutating Chaos Winds thousands of years ago and are to manipulate, cajole, bully, and bribe the many spirits of the land to do magic for them. However, these spirits are capricious and demand a terrible price in return: a witch’s youth. Hag witches (and Wise Women) are well versed in the use of the sight from centuries of travelling the Troll Country, guarding their people from its taint have refined this skill, which allows them to detect the influence of the Dark Gods. [1d]

The Kislevites practice their own unique form of magic which is drawn from the frozen land itself. It can be used as barriers or as devastating attacks to freeze the enemy in their tracks. The Sisterhood of Ice Witches guards a number of potent legends including one that claims a male witch will one day taint the pristine flows of Ice Magic, changing it forever and so ever since the days of Tzarina Shoika, men have been banned from becoming spellcasters in Kislev. Male hedge wizards are tracked down and killed by the state, although if they are noble, they may instead have their magical capabilities removed by the witches using a ritual similar to Pacification in the Empire. Some noble families send boys with magical talent to the Empire to live and learn how to use their abilities, very few dare to return. [1b]

The Kislevites maintain small armies with a large number of mounted units. They make use of the various tribal warriors and create units that keep them separate so as to avoid inter-tribal warfare. They do have some of the fastest human cavalry in the Old World, the Ungol Horse Archers.

Kislevite armies are formed from militia gathered from the scattered stanitsas and towns of the Kislev oblast. When Kislev comes under the threat of invasion, the various rotas ("squadrons" of Winged Lancer cavalry) of Kislev are drawn together into larger army groups called pulks. A single pulk is often enough to deal with minor threats, but when faced with large scale invasions, several pulks can be formed to oppose the enemy.

The Tzar maintains a standing army of Kossars - disciplined Ungol and Gospodar foot soldiers who fight with a characteristic combination of axe and bow. At range they wear down the enemy with arrows, swiftly shifting to their axes to receive an enemy charge. 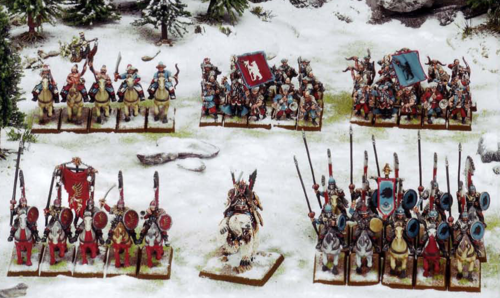 The Kislev military has other units that are not seen in Warhammer. The following units are from the specialist games ranges Knights, Bowmen, Axemen, Trained Bears and War Wagons from Warmaster and Druzhina, Streltsi and Cossacks from Mordheim.

Gospodar and Ungol culture remains largely distinct and in part serves to makes Kislev almost two nations in one. Kislev is also delineated between north and south. In the south, the culture and society of the Gospodars predominate, while to the north, where the lands are more barren, the horse tribes hold sway.

The middle-ranking hereditary nobles of Kislev are known as boyarin. The Boyar's subjects owe him their fealty in return for protection and support in times of war and famine. The boyarin are responsible for organising the raising of militia troops from subject villages, as well as commanding armies. Boyarin are exclusively of Gospodar descent.

Druzhina is the lowest rank of nobility among the Gospodars. Low ranking military officers tend to hold this title. Traditionally the title is hereditary, but is sometimes granted to individuals by a Tzar in recognition of great acts of service to the ruler or to Kislev.

The Kislevites worship many different gods, although only a small number of major ones. The religion of Kislev is steeped in history, absorbing elements of the various different tribe, most importantly that of the Gospodars and Ungols. There are three major gods in Kislev: Ursun, Dazh, and Tor. These three are worshipped over most of the land.

Kislevites also worship many other small, nature and household spirits who help in daily lives or test them. Small offerings and tributes are followed in a near unthinking fashion to appease the needs of the many gods.

Kislev (the name of which probably derives from the Ukrainian city of Kiev) has seen many renditions through the editions of Warhammer Fantasy. It is largely moulded upon medieval Russia and Poland. In Fifth Edition, Kislev units and the Ice Queen could be taken by any Empire army of sufficient size. In later editions Kislev units can be taken as an allied contingent force to good aligned armies.