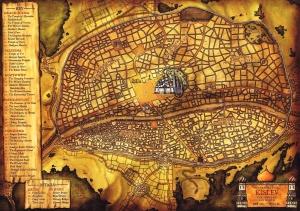 Kislev is the capital city of the empire of Kislev. [1a]

It was founded on the banks of the river Urskoy, a tributary of the Talabec and is home to the Tzars that rule the country. It is the largest and most well developed of the three cities of Kislev, the others being Praag and Erengrad. Due to its position on the Urskoy, it is practically on the border with The Empire and its population is influenced by many of the traditions and religions of the Empire. [1a]

Standing on the banks of the River, Kislev is built atop the Gora Geroyev, which means Hill of the Heroes. as it was originally a burial site for fallen heroes - the red soil of this hill is considered sacred. The city is famous for never having fallen to an enemy force, despite being besieged on several occasions including during the Great War Against Chaos and the Storm of Chaos. [1b]

The first known settlement was a small trading colony set up on the banks of the River Urskoy around the year 500 IC and known as Pelzburg. It enjoyed some prosperity in its dealings with the roving tribesmen, migrating Gospodars, and a few hardy merchants from the Empire. It was later renamed Dorogo, in honour of a great war leader grew to become a flourishing city of trade, establishing links with the Dwarfs. [1b]

That city was razed to the ground when Khan-Queen Miska the Slaughterer led a great migration of Gospodars came over the Worlds Edge Mountains. Aware of the importance of its location, she immediately began rebuilding, renaming it Kislev before embarking on a long and bloody campaign of unification. it was completed by her daughter, the Khan-Queen Shoika, who took on the title of Tzarina after its completion. Its founding also marked the beginning of the Kislevite calendar, year 1 /1524 IC.[1a] [1b]

Once again the city grew and prospered, forming trade links with many other nations, even stretching over the Worlds Edge Mountains to distant Cathay. [1b]

During the Great War Against Chaos, Kislev was relieved by a combined force of an army from the Empire, Elves led by Teclis and Dwarfs from Karaz-a-Karak . [1a]

At the heart of the city lies the Bokha Palaces, seat of power of the Tzars. They were rebuilt by Tzar Boris Ursus after he inherited the throne from his father. The old Palace Gospodarin was destroyed in the Great War Against Chaos, a Chaos Incursion that occurred in 778 GC\2302 IC. It was not rebuilt.[1a]