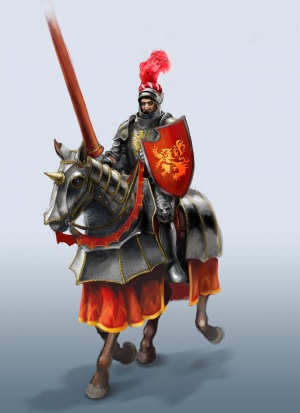 A Knight of the Empire.

The Knightly Orders of the Empire are a heroic brotherhood of armoured warriors who ride into battle atop mighty barded warhorses and sometimes other, more exotic creatures into battle. Knights are magnificent figures, clad in gleaming full plate armour crafted by Dwarfen smiths, armed with weaponry of the finest quality. To become a Knight is also to become one of the most elite warriors the Empire has to offer. [3a]

Many sons of the Imperial nobility choose to join one of the many brotherhoods located throughout the Empire as a way to progress through society, and as such, the Knightly Orders come in many different shape and sizes. Some of these Orders, like the Knights Griffon, only recruit from the local nobility, while others become templars of a particular Imperial deity, such as the zealous Knights of Sigmar's Blood or the Knights of the White Wolf. Some are well known throughout the Empire, while others are quite small, relatively unknown sects valiantly doing their part to make the Empire a safer place for Men to live

Although the common people might find little distinction between the many Knight Orders of the Empire, upon closer observation, one will realize that there are two distinct types of Knightly Orders within the Empire itself. These types are divided between the common Secular Orders (An Order of Knights with no specific allegiance to a Ruler or Religion), and the religious Templar Orders (An Order founded for the purpose of servitude to a particular god).

The mightiest Knights within an order are members of the Inner Circle, Demigryph Knights and the imposing Grand Masters themselves.

Templar Orders are brotherhoods of champions of a particular deity, and act as the figurative 'mailed fist' of their respective religious cult. As well as fighting on behalf of the Empire, they are responsible for defending the temples of their cults and taking the forefront in any holy wars.

The members of Secular Orders will honour most gods in an equal measure.