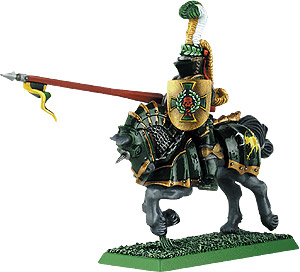 The Knights Griffon is a famous Knightly Order of the Empire founded in 2305 IC which follows the Cult of Sigmar. The Order is based in both Nuln and Altdorf.

The Knights Griffon are one of the most drilled and militaristic orders in the Empire. Their daily rituals mostly consist of strict martial training. An experienced Knight Griffon is the epitome of discipline and soldiery in battle. The Knights Griffon was founded in the year 2305 IC by Emperor Magnus the Pious as part of the rebuilding of the Empire following The Great War Against Chaos. Magnus requested one hundred of the most loyal and devout Knights Panther to meet at his court in Nuln (then capital of the Empire), where he formed an Order of devout Templars directly responsible for the protection of the Temple of Sigmar. The Knights were deeply honoured by their selection and accepted the offer, leading to the creation of the Order of Knights Griffon.

When the Imperial Crown passed to the Princes of Altdorf in 2429 IC, the Knights Griffon moved their chapterhouse to the Cathedral of Sigmar in Altdorf to maintain their vow to protect the heart of Sigmar's realm. As a result, there is some tension between the Knights Griffon and the Reiksguard, whom each views the other as imposing on their traditional roles.