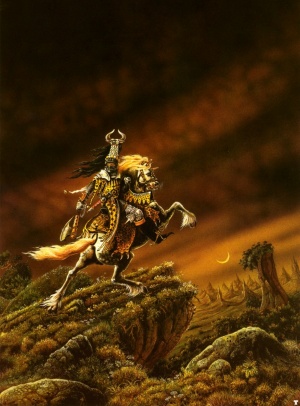 The Knights Panther is a famous Knightly Order of The Empire.

The Knights Panther, are a Secular Order of Knights dedicated to the wholesome eradication of mutants and Chaos worshipers alike, as well as upholding the racial integrity of the Empire as a whole. Being amongst the most powerful of the Knightly Orders within the Empire, this band of Knights are well known throughout the many different cities and Imperial provinces, and are considered to be the most famous and celebrated Order within the Empire, with a history dating back to the lasting years of the Great Crusade some 2,000 years ago. From what was told, once the armies of Jaffar and the Sultans of Araby were defeated by the crusading Knights, and their cities plundered of all their belongings, the Knights of the Great Crusade brought home much plunder from the Sultans' Palaces, including gold and silver, precious gems, silks, furs, and many exotic animals the like of which had never been seen before in the Old World.

Some of the most bizarre and beautiful of these creatures were the panthers, liberated from the pleasure gardens of Al-haikk. They created such a lasting impression to the jubilant crowds cheering the return of the crusaders, that some Knights took up their exotic appearance as well, eventually making these Knights form into the Order that it is today. In time the creatures died of natural causes but their fur would be used for saddle cloths or trimming for fur cloaks, reinforcing the new Order's unique character and reminding everyone of their victories in Araby.

Today the original panthers and even their hides have eroded from history, but the memory of the Arabyan wars is maintained by wearing these exotic animal furs in their armour and clothing, symbolising their distinctive appearance to all that see it.

Knights Panther are distinguished from other knights by their tall helmet crests topped by the image of a Beastman head, a new tradition that replaced the sigil of the Panther some few years ago. This is a change from the spotted great cat of their past, though they retain the distinctive pattern in their saddle cloths and cloaks where-ever possible. These knights would often wear armour of dark blue and silver, the traditional standard colour scheme of their Order. Though the crusades against Araby have long been over, the Knights Panther still carry their lances against the despotic Lords of the South where-ever they can, and stand for the preservation of racial purity in The Empire and to dedicated themselves and their Order to the annihilation of all mutants and other Chaos tainted creatures that live in the Drakwald region. Such fanaticism is not unusual in Knightly Orders, though most choose to battle a foe somewhat closer to home. In the past century, two separate Imperial Decrees commanding the Knights Panther to desist on their regular purges have been issued, but both times, these commands were revoked. The Imperial Court found it preferable to offend a distant foreign nation rather than a powerful martial force within their own homeland.

Although the crusades are a distant memory to the Knights Panther today, they have a substantial presence in the staunchly Ulrican cities of Middenheim and Talabheim and can be seen on many public occasions to commemorate their victories. Unlike their brother Knights of the White Wolf, the Order of the Knights Panther is a secular brotherhood dedicated to the overall good of the Empire, rather than just one particular god. These Knights see's themselves as protectors of the people and their lands; they strive to rise about the political machinations of individual provinces or city-states, and to provide for the greater good of the Empire as a whole.

The Knights Panther are headquartered in a stout fortress built in the modern style, just a few miles from the city of Carroburg. From here, Grand Master Baron Heinrich von Torlichhelm oversees a dozen or more chapter houses scattered mainly across Reikland and Middenland. The second largest chapter house is located in Talabheim. Its knights report to Carroburg as a formality, but they serve under the employ of Countess Elise Krieglitz-Untern. The third largest Knights Panther chapter house represents the Graf’s personal bodyguard in Middenheim, a position that often collides with their brothers of the White Wolf.

The banquet halls of the Knights Panther chapter houses are adorned with the helms of its members from generations to generation. Since the Order dates as far back as the Arabyan crusades of the 15th century, many of the panther head coverings on these memorial helms have turned to leather in order to preserve its quality for all the newer generations. Each chapter house also mounts a splendidly crafted standard behind the head of its banquet table. The Order’s magical battle standard is kept by the Carroburg chapter house, but any chapter may requisition it for conflicts against powerful Chaos Sorcerers.