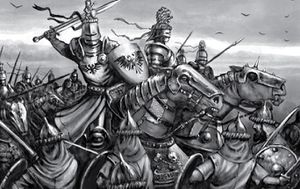 The Knights of Magritta are a Knightly Order from Estalia who seek to unite their homeland and conquer Araby. [1a]

The Order was founded in 1448 IC following the Arabyan invasion of Estalia to recapture Magritta which had fallen to the Sultan Jaffar and his army. Originally only Estalians were recruited but as the war continued knights from Bretonnia and the Empire were accepted. [1a]

After the Battle of El-Haikk and the final defeat of Jaffar, the Order and some other knights remained in Araby for nearly a century. In Magritta, thee leaders of the Order pressed for new crusades and also constructed a fleet to harass the shipping of the enemy. It was this raiding that caused the order most problems as the merchants of their home city were also trying to build trade with their former enemies. [1a]

Taxes and levies were enacted that targeted the Order and eventually in 1556 IC, their Grand Master led them to their ships and sailed away. However he first gave a speech that warned that Estalia would only be united when the Order returned. [1a]

The first Aquila Academy is founded in Luccini in 1720 IC and becomes the Orders new headquarters. A second academy was created in 1861 IC in Carcassone and finally in 2112 IC a third academy was founded in Nuln. [1a]

When Magnus the Pious led his army north against Chaos in 2302 IC, the entire academy in Nuln joined him, achieving much glory but only a third returned. Magnus rewarded them with a Imperial Charter and land in the Temple Quarter. [1a]

Master Gunther Ostermann leads the Nuln academy to war during the Storm of Chaos, again achieving much glory. [1a]

Most members of the order are worshippers of Myrmidia. [1a] The Order have three ranks. [1a]

The Order has many allies in the Cult of Myrmidia and its templar Orders, with their knights often graduating from one of the Order Academy's. [1a]

Each of the The academies use the golden eagle of Myrmidia with a spear clutched in its claws but on a different coloured background. Luccini is red, the Empire black and Carcassonne blue. Members can also use variations of the triangle as a secret sign with meaning imparted by the use of colour. A red triangle for danger and white means help is needed. [1a]