Knights of the Blazing Sun 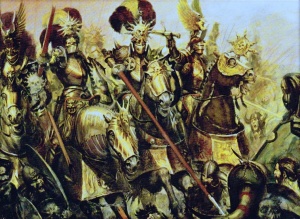 Knights of the Blazing Sun.

The Order of the Blazing Sun is a famous Knightly Order of the Empire which follows the war goddess Myrmidia.

The Order is currently based in Talabheim. Knights of the Blazing Sun are arguably the greatest knights in the Empire. Favored by Myrmidia, many warriors are able to set their weapons ablaze with immolating fire, slaying their enemies for the Goddess of War.

The origins of the Order began during the wars against Sultan Jaffar of Araby in 1457 IC. During the Battle of Magritta in Estalia, a group of knights lent their aid in the battle to recapture the Temple of Myrmidia in Magritta from the Arabyans. The battle seemed lost for the Old Worlders until a sudden, freak earthquake shocked the temple, dislodging the huge bronze statue of Myrmidia atop the building, and sending it smashing to the ground, where it crushed the Emir Wazir the Cruel and his Black Scimitar Guard.[2a]

The leaderless Arabyan horde abandoned the temple to the Knights. To the Knights, the incident was unquestionably divine intervention from Myrmidia herself. Upon returning to the Empire, the veterans of the battle founded the Order of the Blazing Sun and built a shrine to Myrmidia in the heart of Talabheim.[2a]

The order soon found itself engaged in another conflict. Receiving news of Hochland's capital of Hergig having come under siege by the huge Beastmen horde of the Beastlord Gorthor, the knights of the recently founded order hurried towards the beleaguered city. Arriving weeks into the siege, the knights caught the Beastmen horde in the rear, cutting down the foul Chaos spawn by the droves and spreading chaos among the Beastmen. With the death of Gorthor at the hands of Hochland's Elector Count Mikael, the Beastmen retreated from the city and back into the wilderness. During the aftermath of the siege, the Order of the Blazing Sun spent many days pursuing the Beastmen.