Knights of the White Wolf 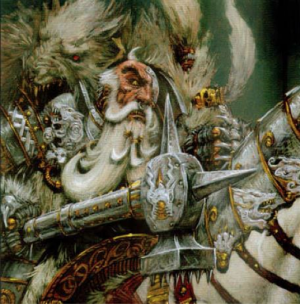 A Knight of the White Wolf.

The Knights of the White Wolf, or White Wolves as they are also commonly known, are the most infamous of all the Templar Orders under the worship and servitude of the Ar-Ulric and their God, Ulric, God of Wolves and Winter.

Readily identified by their distinctive wolf pelts and their savage fighting-style, the Knights of the White Wolf are the most ancient and largest of the Templar Orders in the entire Old World. [7a] The Knights' wolf-skin cloaks, coupled with their long, often wild hair and beards, gives them a barbaric appearance similar to those of the first worshippers of Ulric, but in truth they are a highly disciplined and martial Order whose presence inspire both courage and savagery that rivals that of even the most blood-thirsty and savage of the Northmen Warriors.

Their founding dating back to the time of Ar-Ulric Wulcan, during the Age of Sigmar some 2,500 years ago.

During the Age of Three Emperors, the Order split betwee, with some siding with Middenland, Middenheim and later Talabheim when the Ar-Ulric decamped there in 1360 IC with the self proclaimed Empress, Ottilia I. [8a]

All cities and most major towns have some White Wolves present. [8a]

The Knights of the White Wolf are based in the city of Middenheim, where their Order was founded following a great victory against the Forces of Chaos outside the city walls during the first few years of Sigmar's reign as the First Emperor of the Empire. The Knights are all followers of the god Ulric, who is worshipped throughout the Empire as the patron God of War, a position that supplements the position of Sigmar in the more northern provinces such as Nordland and Middenland.

The Knights of the White Wolf are Templars of Ar-Ulric, the leader of the Cult of Ulric and the greatest Ulrican in the Order. According to ancient Teutogen tradition, the High-Priest known now as the Ar-Ulric is expected to raise and maintain his own force for the defence of the Temple and the faith, and to honour the wolf-god in battle with their valiant deeds whenever he can. Almost every temple of Ulric, from the smallest of shrines to the high temples in Middenheim, has at least one or two White Wolves stationed in it. Independent chapter-houses of White Wolves do exist, but these are a rare occurrence.

Those larger chapter-houses have within their ranks around several units of White Wolves, the duties of which extend beyond merely guarding Ulrican interests. The Templars there would often venture out on military missions to take the fight to their enemies, including joining on seasonal Crusades against local Beastmen or Greenskin encampments within the Drakwald region.

Whilst on duty however, the White Wolves are tasked with guarding the temples and priests of Ulric throughout the Empire and beyond. [7a] Units of White Wolves may be dispatched on quests or missions, or they may be sent to battle, marching as part of the army of Middenland to war, or accompanying a larger Templar army on a crusade against a common foe. These Knights are very distinctive, both on and off the battlefield.

As they charge into battle, these Knights would naturally bellow savage oaths to their God, Ulric. This guttural howling has sent many foes scattered to the winds long before the charge has even made impact. It is thanks to their prowess in battle that the Northern Provinces have managed to flourish under their watchful guard, ensuring that the lands of Ulric will never be under the control of the Dark Gods.

The elite Teutogen Guard - the bodyguards of Ar-Ulric, which would fight on foot - were drawn from the ranks of the Knights. [7a] Their Inner Circle was known as the Fellwolf Brotherhood.

When on duty or in battle, White Wolves would normally dress in heavy suits of plate mail, lacquered black or treated with dark oil. Every Knight wears a distinctive wolf pelt over his shoulders, a tradition that dates back to the first Ar-Ulric, and also as a badge of honour to indicate his acceptance as a full fledged brother of the Order. They carry neither shield nor helm, and ride to battle bareheaded to show off their long hair and beautifully plait beards. Their distinctive weapon is a fearsome double-handed hammer which they swing round their heads from horseback, knocking enemy horsemen from their saddles and pounding the skulls of foes on foot. It is common to see White Wolves fight from the back of red-barded warhorses, usually wielding large cavalry hammers instead of lances when they charge. When not mounted, they often replace their hammers with an even larger warhammer that they swing about themselves in deadly arcs. [7a]