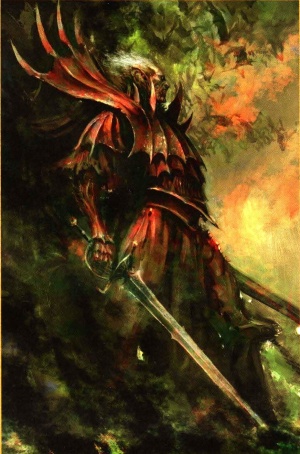 Konrad was one of the last vampires to be sired by Vlad. Vampirism did little to strengthen Konrad's already tenuous grip on reality. His exploits included burning down entire towns because their smells displeased him, and trying and convicting his own mother for the crime of having given birth to him without his prior permission. He also made a habit of killing many necromancers, as they often made the mistake of mocking Konrad's (admittedly pitiful) magical powers.[1a]

Vlad's death in 2051 at the Siege of Altdorf left the rulership of Sylvania vacant and was immediately disputed between Vlad's surviving brood. In 2058 IC, Konrad had invaded the Moot but was forced to return to Sylvania when Hans claimed Drakenhof Castle. [2b] The chief contenders - his 'brothers' Fritz, Pieter, and Hans - all came to unholy ends. Fritz was killed while attacking Middenheim. Konrad killed Hans in a duel over who was the toughest. Pieter was slain in his coffin by Helmut van Hal, a descendant of the infamous Necromancer Vanhel. [1a]

After the killings of his rivals, he assumed power in 2094 IC [2b] and immediately marched to war against The Empire, wishing to emulate the victories of Vlad. Because he had no talent at sorcery, Konrad changed his tack on necromancers and cajoled, bribed and bullied a large number of necromancers into serving him. The undead horde they raised was so immense it was able to triumph against any force sent against it, despite Konrad's insanity and his ineptitude as a general. [1a]

Agianst the advice of his few remaining councellors, Konrad declared war on the Dwarfs, attacking outlying settlements of Zhufbar whose King marched on Sylvania. The two forces met in battle at Nachthafen and at first the dwarfs had the upper hand as their Runesmiths prevented the necromancers from using their powers. Konrad himself led an all-out attack and slew them, dispatching Walach Harkon to duel and slay the Dwarf king. [2a]

War with the Empire

After several attempted invasions of The Empire, Konrad's advance was finally halted at the Battle of Four Armies in 2100 IC by a combined force from Altdorf, Talabheim and Marienburg (the battle is remembered mainly for the fates of the Imperial leadership, all of whom were contenders for the Imperial throne: Lutwik the Count of Altdorf and Ottilia IV of Talabheim ordered each other's assassination in the heat of battle, while Helmut, Count of Marienburg, was slain by Konrad).[1a][2a]

However, the undeniable disadvantage of being dead did not stop Helmut contending for the imperial throne and after the battle he journeyed to Altdorf to ascend to the imperial throne. It was only when his extreme lethargy, pallid skin and digusting odour developed into full decomposition that he was actually a zombie under the control of Konrad! The necromancers controlling Helmut fled as soon as they were found out. Konrad's ploy to become emperor may have succeeded if the magic binding Helmut to Konrad's will had been more complex and thus able to sustain Helmut's decomposing body better. It is interesting to note that Mannfred von Carstein did not try to replicate this (fairly cunning; at least for Konrad) ploy. This would have been an easy way to misdirect and inhibit the Empire, allowing him to conquer it with ease.[1a]

Konrad was finally defeated in 2121 IC at the Battle of Grim Moor by an alliance of Dwarfs and The Empire under Elector Count Helmar of Marienburg - the son of Helmut. In the heat of battle, Konrad's necromancers deserted him and his undead horde collapsed without them. Konrad was the battle's last casualty: the Dwarf Thane Grufbad held Konrad down while Helmar of Marienburg beheaded his father's killer with his Runefang and hacked the body to pieces, burning the remains. [1a][2a]