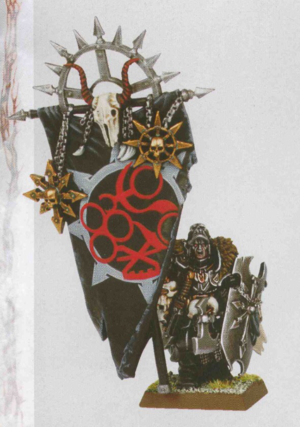 The Standard Bearer of the Swords of Chaos.

Kordel Shorgaar is a name feared across the great northern steppes. Slayer of the great beast Tharnol, single handed slaughterer of the Oerskinar tribe and the victor of the Blood Fields of the Aeslings, he has earned much respect and honour amongst the warriors of Norsca and the Kurgan realms.[1]

When still in his teenage years, the young warrior led his tribe on a trail of glorious rampage, earning the countless ritual scars of victory that criss-cross his arms. Thousands fell beneath his blade as the years rolled by, and none could match him on the field of battle. It was at this time that he gained the attention of Archaon, the fell Lord of the End Times. This was one foe that Kordel could not best, and after hour upon hour of ritual combat he fell on his knees, exhausted, his body pierced and cut in a hundred places. As he awaited the killing blow, still he glared defiantly at Archaon with eyes of pure jet. Archaon respected the warrior spirit of Kordel, and could feel that the gods favoured the young man, and so he spared him.[1]

Archaon honoured Kordel by initiating him into the Swords of Chaos, and allowing him to bear his fell standard. A decade later, as Archaon marches upon Middenheim, Kordel still rides at his side, ever faithful to the one he could not best, bearing the mighty banner of the Swords of Chaos. He has fought at his lords side through a hundred wars and has seen a million slain before the wrath of the Everchosen and his swords. It has been dcreed by the Chaos Gods that it is Kordel's fate to be at his masters side until the final outcome of the apocalypse, until the arrival of the End Times.[1]