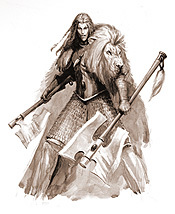 Korhil, Captain of the White Lions

Korhil is the present Captain of the White Lions of Chrace.[1a]

Among the White Lions, he is claimed to be the mightiest Elf in all of Ulthuan, and certainly his strength and stature is legendary. Yet, Korhil is no lumbering giant, for he wields his long axe with a dexterity and grace that makes even his fellow White Lions appear cumbersome. His honest demeanour and noble bearing have won him many friends among the Lords of Ulthuan and other races besides.[1a][3b]

Such is Korhil's integrity, and the trust that Phoenix King Finubar places in him, that the Captain of the White Lions has led the armies of the Phoenix King on a number of occasions, acting as both Finubar's champion and general. [2a]

As a young Elf, he hunted the Chaos mutated lion Charandis from the Annulii mountains, wrestling and finally killing with it his bare hands and whose pelt he still wears. Shortly after he confronted a Dark Elf radiing party and slew its leader, the master swordsman Saurios Nightblade in single combat. [1a]

Following the death of the captain of the White Lions at the hands of Urian Poisonblade, the remaining bodyguards elected Korhil as their new captain, endorsed by the Phoenix King. [1a]

At the battle of Tor Achare, he stood against Morech the Blacks Manticore and although he was badly mauled he disembowled the mighty beast before collapsing unconsious. Finubar gave him a gem studded belt in recognition of his bravery and skill at arms. [3b]

In 2307 IC, the Assassin Gloreir Duskblade and his cadre of acolytes nearly killed the Phoenix King, but were stopped by the White Lion bodyguard led by Korhil. When the assassins retreated, they were chased across the rooftops of Lothern by the bodyguards and Korhil himself took the head of Gloreir, his body falling to the foot of the Glittering Tower. [3a]