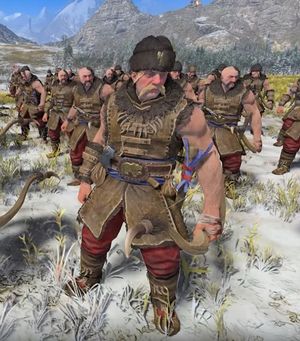 Kossars are foot soldiers of the Kislev Military, and are a distinct combination of archer and axeman. [1a]

The original Kossars were members of an Ungol tribe who worked as mercenaries, fighting with the Gospodars against the Ungols and had adopted a unique style of fighting, that of axe and bow. They went on to teach the Gospodars these tactics and the present Kossars exist as a mixed unit of Ungol and Gospodar soldiers. They are kept by the Tzar as a standing Kislev force and are well trained, meeting the enemy both at range and in combat.[1a]

Kossars are full-time soldiers, mostly by the crown or by wealthy families and spend their time training or carousing. On the battlefield, they are dour, grim-faced killersbut once the fighting is completed they are belligerent, boisterous, and hard-drinking at the victory feast. [2]

Kossars wear heavy armour above the waist as well as sturdy reinforced boots, though their legs are usually clad in baggy trousers.[2]