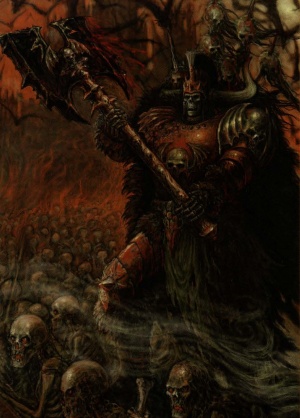 Krell was an undead wight of incredible strength and skill. He was one of the original Dark Lords of Nagash, and later one of his Mortarchs.

Krell was a Chaos Lord of a large tribe of Chaos Warriors dedicated to Khorne, living roughly 1500 years before the foundation of the Empire. He created a large kingdom somewhere in the future Empire and/or in the Chaos Wastes. After warring against human barbarians, he turned his attention to the realms of the Dwarfs, allying with Night Goblins. He attacked with Night Goblins and conquered the Dwarf fortresses of Karak Ungor and Karak Varn, but was defeated and slain while attempting to attack Karak Kadrin by an army led by Grimbul Ironhelm. [2b][3a]

He was buried on the edge of the Chaos Wastes, and was re-discovered by Nagash while he was looking for his lost Crown of Sorcery. Knowing of his skills as a commander and warrior, he decided to resurrect Krell to serve him as one of the Nine Dark Lords of Nagash. He fought in the Battle of the River Reik, which he survived, escaping the battle and fleeing from Sigmar's victorious forces. With what remained of his soldiers, Krell laid waste to a swathe of towns and villages, till he was finally cornered and defeated at the Battle of Glacier Lake. His body was interred within a magically constructed tomb to prevent his return. [2b]

In the service of the Lichemaster

Heinrich Kemmler, the Lichemaster and a powerful necromancer, discovered Krell's tomb and managed to restore his powers and abilities by praying to the Chaos Gods. So it was that Krell rose from the dead once again, to fight alongside his new master. In the service of the Lichemaster Krell fought extensively against the forces of Bretonnia at including at the Battle of La Maisontaal abbey [2b] [1a], the Wood Elves during the 'Winter of Woes' and the Empire at Castle Reiksguard. It was at this last conflict that Krell dueled the infamous trollslayer Gotrek Gurnisson, actually managing to wound the dwarf, with the cursed power of his axe nearly gifting the slayer his long sought after doom.

During the early months of the End Times Kemmler and Krell joined forces with Arkhan the Black in his campaign against la Maisontaal abbey in Bretonnia. To this end Krell fought and slew the last Duke Tancred while Arkhan and the traitorous Kemmler battled to seize the staff of Nagash. The Lichemaster had chosen the uncertain future offered by the capricious and fickle Gods of Chaos rather than the sterile and static vision Nagash had for the world. After the so-called Lichemaster's destruction at the hands of the Liche King, Krell joined Arkhan. While Arkhan travelled back to Sylvania to resurrect Nagash, Krell distracted a following Beastman herd led by the Bray-Shaman Malagor that was bent on stopping him (even if they didn't exactly know why).

After Arkhan and his reluctant ally Mannfred von Carstein succeeded in bringing Nagash back to the world Krell, as one of the few surviving original Dark Lords, was made a Mortarch, one of Nagash's new commanders. Serving as one of Nagash's premier generals the new Mortarch of Despair was first sent to the Worlds Edge Mountains to report on the activities of another original Dark Lord, the vampire queen Neferata. Whether he was originally sent to recruit her or punish Neferata's past insolence is unclear, but it is known is that when he came across Neferata's legions battling a greenskin army in Skull Chasm he joined her in destroying the goblin forces. He then joined her in raiding a secret dwarf vault at Valaya's Gate. Here they worked together to destroy the forces of Karak Azul, with Krell himself slaying the legendary King Kazador in personal combat.

Following this Krell led the largest contingent of Nagash's three pronged attack into Nehekhara. Allied with fellow Mortarch Dieter Helsnicht Krell faced the legions of King Phar of Numas at the Battle of Blight Water. He defeated but failed to obliterate the army facing him, so as he progressed first through the northern marshes and then the vast Salt Plains before finally the Great Desert, he was forced to fight a series of running battles with the great king as he marched towards Khemri over many months. Only the intervention of Helsnicht finally defeated the Numas army.

Reaching Khemri, Krell led the assault against the vastly larger forces of Settra. Combining his own forces with those of Arkhan's elite guard from Nagashizzar, various traitor Tomb Kings and the mixed horde led by Mannfred von Carstein and Luthor Harkon Krell started to attack the city gates. Despite Krell himself being ripped apart by a Tomb Scorpion Nagash's forces were eventually victorious. Settra was destroyed and Khemri was razed to the ground, with the exception of Nagash's Black Pyramid which mystically took flight and returned with it's creator to Sylvania.

Krell was restored by the now fully powered Nagash. When a large Nurgle force invaded Sylvania Krell marched to the province's defense at his master's order after the Mortarchs Mannfred von Carstein and Luthor Harkon failed to drive it back. Krell sent wave after wave of the more savage and bestial of Sylvania's undead to slow down the enemy horde, with no regard to the waste. Eventually however the daemon army still reached the Black Pyramid. Krell and his Doomed Legion anchored the centre of the defending army and battled against the Nurgle daemons. Despite holding firm against the forces of the plaguefather Krell was bested in combat by the Great Unclean One Scrofulox who proceeded to eat the battered Wight King whole. The whole battle was revealed to be a distraction when a Skaven team led by Ikit Claw destroyed the Black Pryamid, dispersing Nagash's huge reservoir of death magic. In a rage Nagash destroyed the entire daemonic army, including Scorfulox and once again restored Krell to existence, even though he now considered him a failure.

Krell accompanied Nagash first to Athel Loren to join the Council of Incarnates, and then to Middenheim when the various armies of the incarnates were transported there by Teclis's desperate spell. At the battle of Middenheim Krell led the Doomed Legion one last time against the combined Slaaneshi forces of Sigvald the Magnificent and the monstrous hordes of Throgg the Troll King. Krell and Sigvald engaged in an epic duel, the speed and murderous elegance of the Geld-Prince perfectly matched with the strength and relentless skill of the Wight King. Ignoring the battle around them the two traded blows until eventually Krell managed the score a wound on the face his opponent. Vein beyond mortal understanding, this drove Sigvald into an insane fury and he finally overcame Krell with a mindless series of frantic, savage blows with sword, shield and fists, senseless to any damage to himself in the process.

Krell was defeated once more, but this time Nagash had neither the energy or inclination or restore him. The Wight King was finally destroyed.