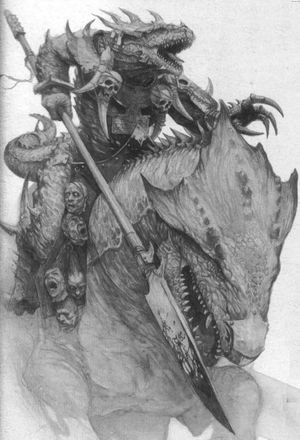 A huge Saurus with a crocodilian head. [1a]

First spawned in the city of Xhotl with only a handful of other Saurus, all of which were marked by the god and had a inherent ability to dominate the beasts and monsters of the jungle. Kroq-Gar himself claimed the most aggressive Carnosaur of a brood reared when he was spawned. [2c]

After the fall of the Polar Gates, Kroq-Gar led many patrols destroying hordes of Daemons as the Mage Priest Chaqo-Quantal focused on defending the city magically. However, after thirty cycles of the sun, a crack in these defences allowed the Daemons to break in and tear apart the Slann before Kroq-Gar could reach them. [2c]

He fought on with his dwindling forces until the last of the Daemons were banished but the city was now in ruins. Kroq-Gar then led his remaining warriors on wide ranging hunts through the jungle, destroying the never born whereever they could be found. [2c]

During the Shrunken Head War of -594 IC, he slew the warbosses of all six Savage Orc tribes. [3b]

He is said to have killed over a thousand Skaven Warlords since the rise of Sotek. [3a]

When Dark Elf Raiders appear via the Black Way, Kroq-Gar defeats them and then has their Black Ark, the Umbral Tide grounded and destroyed. [3b]

In 2520 IC, Kroq-Gar is dispatched to Albion through magical portals to cleanse the island of warm-bloods before Lord Mazdamundi alters the climate of the island to allow jungles to grow. Construction then begins on the city of Konquata. [2a] [2c]

He is famed for his Bony Plates along his back and devastating Massive Jaws with which he bites off enemy heads. [2a]