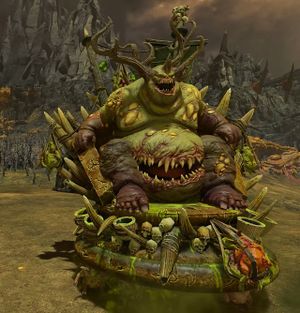 Ku'gath Plagufather is Nurgle's mightiest Great Unclean One, empowered by the deadliest plague ever created.

He is known as Fetid Brewmaster, Plagueweaver, Rotting Poxmaker. [1b]

Whilst other Great Unclean Ones work to spread the plagues already extant, Ku'gath, the Plaguefather, is fascinated by the breeding of new and virulent life. Ku'gath aims to one day breed a contagion that can infect the gods themselves. The Plaguefather prides himself upon his detachment — after all, what concerns could possibly encroach on this great work? So absorbed is he in his search for the perfect plague, Ku'gath remains relatively untroubled by the shifting balance of power within the Realm of Chaos, yet this is not to say that the Plaguefather does not play his part in the Great Game. Ku'gath's experiments are nothing without practical results, and he is ever eager to test fresh creations on the battlefield. [1b]

The Plaguefather rides upon a massive palanquin bedecked with alchemical paraphernalia: vials full of seething powder, flasks of indescribable liquid and hessian sacks stuffed to bursting with Nurglings. This great bulk is held aloft by a carpet of straining Nurglings, and Ku’gath is attended on by countless others, all bred from the Plaguefather's pox vats. Ku'gath's Nurglings are not merely servants — they are also ammunition, for in battle Ku'gath is wont to hurl them into the enemy ranks. The unwilling projectiles burst on impact, drenching the target with disease-ridden fluids. Ku'gath watches keenly as each Nurgling's pox takes effect. Should the plague achieve Ku'gath's expectation, he gurgles with a proud father’s delight. If the results do not meet with approval, Ku'gath immediately brews a refined version of the plague, dunks a fresh Nurgling, and lets fly once again.[1b]

Of all Nurgle's Daemons, Ku'gath is the most willing to enter the physical realm - his quest for more efficacious plague-reagents knows no boundaries. A few drops of mortal blood can turn a quiescent pox into a raging epidemic. Ku'gath has discovered that ground Skaven bladder, for example, increases the virulence of Red Pox a hundredfold. Thus, in the cause of experimentation, Ku'gath makes a point of acquiring fresh specimens whenever he enters the mortal worlds. Indeed, the Plaguefather keeps a variety of specimens, mortal and Daemon, caged in a dank chamber among the sagging rafters of Nurgle's decaying mansion, so that he always has a suitable supply of ingredients to hand. [1b]

It is during forays into the mortal world that Ku'gath has encountered the one race that has penetrated his scientific detachment to kindle his rage - the Dwarfs. On a professional level, the Plaguefather hates the creatures for their resilience to disease; on a personal level, he is embittered by a truly ignominious defeat beneath the walls of Karaz-a-Karak. Either way, there is no doubt in Ku'gath's mind as to the first test subjects when his perfect plague is prepared. [1b]

As others assaulted the Slann temple cities, Ku'gath attacked the Dwarf holds, finally marching on Karaz-a-Karak with a mighty legion. He and his horde found the outer gate unguarded but when they entered, the the defenders brought the mountain down upon them, obliterating them. [1a]

In the year 111 IC, a great daemonic horde sweeps over the World's Edge Mountains, bringing ruin in its wake. No one Daemon leads this host, for it is too massive to be guided by a single will, but it is Ku’gath Plaguefather who leads the attack on the Dwarf capital Karaz-a-Karak, just as he had done five thousand years before.

Under the Plaguefather's direction, the Daemons assail the Dwarfen defenders with every contagion ever to curse the world. Yet, as in Ku’gath’s last assault, the tenacity of the Dwarfs proves too much for even his most prized plagues. The Daemons breach three layers of defences, but four others remained unsullied by their hands. The siege is eventually lifted and Ku’gath banished by the stout and vengeful arm of King Stromni Axehand.

The Battles of Stone and Tire

In 1316 IC no fewer than three Dwarf holds — Karak Mar, Karak Nol and Dok Duraz — are lost to rampaging Daemons. Indeed, that Zhufbar does not fall also is due to the iron resolve of its defenders, a formidable array of emplaced war engines and the timely arrival of a relief army from Karak Kadrin. The Great Unclean One Kugath Plaguefather, failing to conquer where three rival Greater Daemons succeeded (and thus losing Father Nurgle a wager against his brother gods), is banished to the Forge of Souls in punishment.

The Plaguefather was eventually defeated during the final days of the Old World, destroyed whilst dueling King Louen Leoncoeur of Bretonnia, but not before weakening him enough to be finished off by one of his servants.